Adam Desnoyers missed the phone call, but he got the message.

He’s just not sure he believes it yet.

In January, a voice on Desnoyers’ Berkeley, Calif., answering machine said that his short story, “Bleed Blue in Indonesia,” had been selected as an O. Henry Award winner and would be published with 19 others in the 2003 Prize Stories anthology.

“That was absolutely bizarre. It’s just like straight out of nowhere. You have the O. Henry and you have the Best American Short Stories, and that’s like as good as it gets for being in short story anthologies,” said Desnoyers, who recently moved to Lawrence with his partner, Rebecca Curtis. “They just choose you, so you don’t really have any control over it.

“I still don’t believe it. I’m still convinced there’s a way that I can mess it up.”

What’s perhaps more “bizarre” than Desnoyers getting a nod from one of the most prestigious short story collections in the country is that Curtis has been singled out for her writing as well. Her “Big Bear, California,” originally published in the July 2002 Harper’s magazine, will be included in the anthology’s short list of recommended stories.

O. Henry anthology editor Laura Furman wasn’t sure whether a couple had ever been featured in the same issue in the anthology’s 85-year history but said it certainly was an odd fact.

“There’s a lot of really established authors who are in the anthology, so it’s exciting to have your name mentioned alongside theirs.”

The news has also been exciting to the English department at Kansas University. That’s where Desnoyers and Curtis will begin teaching in the fall — Curtis as an assistant professor of English, Desnoyers as a part-time lecturer in the same department.

“We were excited, tremendously, about getting both Rebecca and Adam here to teach. And then finding out that Adam had actually won an O. Henry and that Rebecca was mentioned as honorable mention was kind of a bonus, but yet not surprising because they’re both really talented,” said Tom Lorenz, associate chairman of the English department. 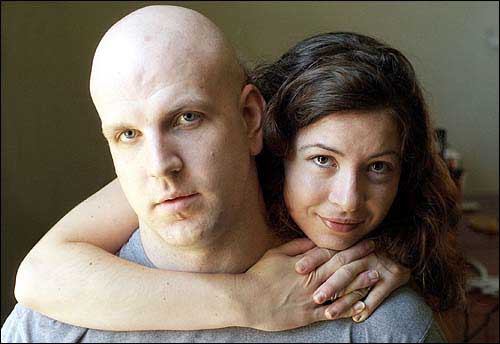 Adam Desnoyers, left, and Rebecca Curtis are the newest English department faculty members at Kansas University. Both Desnoyers and Curtis, who are pictured Wednesday in their Lawrence home, are being honored by the 2003 O'Henry Awards Prize Stories anthology. Desnoyers story, Bleed

He couldn’t recall any other faculty winning an O. Henry or a spot in Best American Short Stories in the 15 years he’s been at KU.

“This is very exciting and very prestigious for our writing program,” Lorenz said.

Rising to the top

Two writers in the same house could conceivably butt heads, but Desnoyers and Curtis love the arrangement.

“I think it’s great because she’s so good. Everything I write has to go through her before anyone else sees it,” Desnoyers said. “I learn so much from her about language. I just really trust in everything she says.”

“He really understands the structure of stories, plot narrative, in a way that I don’t,” she said.

William Sidney Porter, best known under his pen name, O. Henry, was known for his simple characters and easy narrative voice. The 19th-century American writer is considered by many to be THE master of the short story.

It was the “realness” of Desnoyers’ “Bleed Blue in Indonesia” that elevated it to top of the thousands of stories Furman read in literary journals and magazines from across the country before making her selections.

The story, first published in The Idaho Review, follows Cliff, the narrator, and his good friend Will during a hot Ohio summer. Cliff is trying to understand how Will could let an intense love interest slip away. Meanwhile, Will seems to be slipping off into a bizarre world of his own.

“It’s very much a young man’s story, and I believe it’s a story about a kind of devotion — the devotion of the narrator to his friend, the devotion of the friend to his lost lover,” Furman said. “It’s also about people living with different forms of loss and things that will never happen for them.”

“Bleed Blue in Indonesia” is actually a self-contained chapter from a novel Desnoyers recently completed but hasn’t been published.

Desnoyers, 30, grew up in Massachusetts and got a bachelor’s degree in English from Dickinson College, Carlisle, Pa., in 1995. He worked as a sports correspondent for the Community Newspaper Company in Concord, Mass., in 1995-96 and then did landscaping work before entering the creative writing program at Syracuse University in 1997. That’s where he met Curtis, who had been accepted into the school’s poetry program but begged her way into the fiction track after the first year.

Desnoyers has taught at The State University of New York College of Environmental Science and Forestry and St. Mary’s College in Moraga, Calif.

Curtis, who’s 29 and grew up in New Hampshire, did her undergraduate work at Pomona College in Claremont, Calif., then got a master’s degree in English from New York University before pursuing her MFA in fiction from Syracuse. She also taught at St. Mary’s College.

Her stories have been published in Harper’s, The New Yorker, McSweeney’s, The Gettysburg Review, The Antioch Review and other journals.

She got the idea for the haunting “Big Bear, California” from a friend’s bad blind date experience but fleshed out the story and set it in Big Bear, a place she was familiar with because she’d been there with friends. In the story, an uncomfortable date is prolonged into a frightening situation when Jacob shows up, uninvited, to the narrator’s dorm room.

“Rebecca’s story is the story of a woman who’s essentially hiding out, and I thought it was a frightening story in a lot of ways,” Furman said. “I thought that guy was so threatening.”

This is Furman’s first year as editor of the O. Henry anthology, and she’s made a few changes, one of which made Curtis’ distinction even more special. She trimmed the recommended reading list, which in the past has been up to 100 stories long, to just 15 stories.

Then there’s the prestige of being listed among a string of greats that includes Joyce Carol Oates, John Updike, William Faulkner, Eudora Welty, Flannery O’Conner, Truman Capote and Louis Erdrich, all of whom have received multiple O. Henry Awards.

“My absolute idol and one of my favorite contemporary writers is in it,” said Desnoyers of Denis Johnson. “The idea is that it’s the 20 best stories in their opinion that came out that year. It’s usually like the big guns. You’ve usually heard of everyone in there. That’s why it was so surreal for me to be in there.”