Friends and family of Gardner gathered Friday evening to celebrate the combined 20 years of tough love and to thank Gardner for keeping the program alive.

“We knew it was the 20th anniversary and everyone kept saying we need to do something special,” said Beverly Gardner, Don Gardner’s wife and organizer of the celebration.

Beverly Gardner invited all the earliest members of the program she could contact to Friday’s session and to a party at the Wheel Cafe, where family and friends gathered for cake after the workout.

Reggie Demby was one of the original six LHS players to sign up. He said he took the extra training because it gave him something productive to do during the summer. 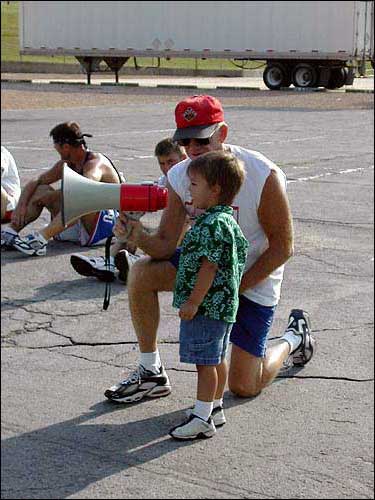 Gardner said the exercises and runs hadn’t changed since he started, but he is not able to interact as much with larger groups. Demby said that alone made the program easier.

“It was a lot harder than it seems like it is today,” Demby said. “He was more involved back then, and a lot more vocal.”

Gardner said he kept the program going because it provided people with structured exercise. The sessions are offered three times a day on weekdays.

“I think people want to workout,” he said. “And to use this facility is awesome.”

Gardner is not sure what the future holds for the workout sessions. He said he might stop leading them soon because of the time commitment and responsibility. He said he had become frustrated with the program in the past, but his family encouraged him to stay through this summer.