Summer offers a time when Boy and Girl Scouts can take their learning and fun outside; in this case, Boy Scout Troop 52, chartered to First United Methodist Church, spent June 20-21 camping out at Woodridge Park near Clinton Lake.

Journal-World photographer Thad Allender joined Troop 52 for an evening, following Scouts while they swam and worked with a compass. The skills Scouts learn help them eventually earn merit badges; here, Journal-World Teen Advisory Board member Alek Joyce, a sixth-grader at Pinckney School, writes some pointers on earning a badge:

“From snow sports to swimming, woodwork to metalwork, oceanography to forestry, the range of merit badges in Boy Scouts is broad.

“A merit badge is a special achievement given when certain requirements are met for that badge. Some things you can do at home, like home repair, while others can be done outside, such as camping. Requirements range from a 20-mile hike in one day to humming a song. Merit badge counselors sign off the requirements as they are completed. Not only are Scouts learning skills which they will use in life, they also are working to achieve a higher rank. The rankings: Scout, Tenderfoot, Second Class, First Class, Star, Life and Eagle. To become an Eagle Scout you only need 21 merit badges.” 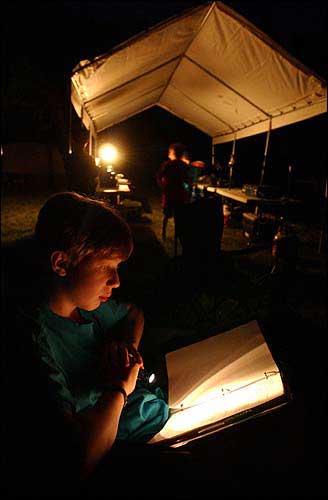 Tim Barta reads the Scout schedule and advancement requirements by flashlight. At 10 p.m., all lights were out, and the Boy Scouts from Troop 52 were whisked to their tents for some rest. 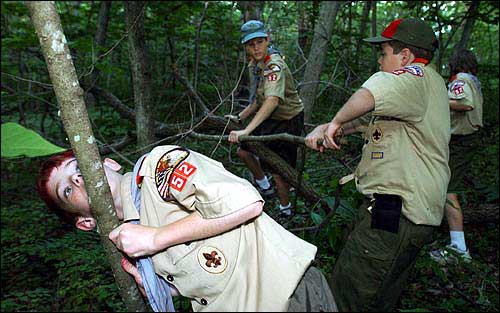 Doug Rawlings, left, stops to look at a spider camouflaged by a tree as fellow scouts Evan Cloar, center, and Alek Joyce gather fallen limbs for firewood. Cloar, the eldest of the group, led Troop 52 through its chores and activities at the park. 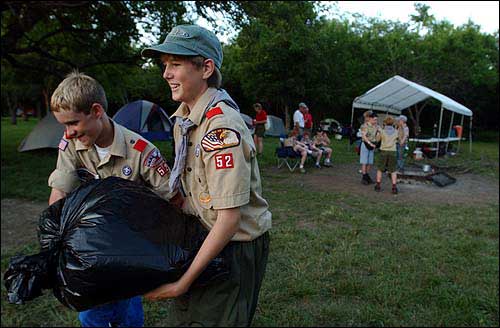 Boy Scouts from Troop 52 David Long, left, and Evan Cloar carry a bag of ash from their campsite. Teamwork is the glue that holds all troops together, according to Troop 52's Scoutmaster Wayne Deaver. 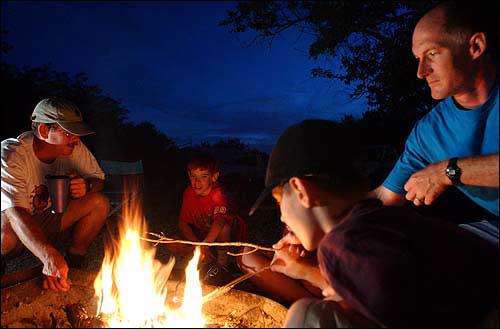 Boy scouts and their fathers gather around the fire to roast marshmallows during a weekend campout. Pictured are, from left, Richard Rawlings, his son Doug, Chris Golledge and his son Brendan. About 10 parents accompanied 15 Scouts on their campout. 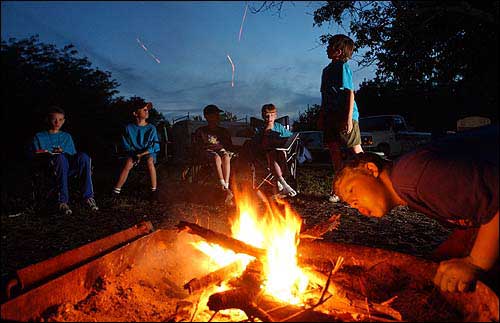 Brandon Mailand blows on the campfire to keep it going as fellow Scouts gather around to tell stories at dusk. Camping is a monthly routine for Boy Scout Troop 52, which spent a weekend in Woodridge Park on the west side of Clinton Lake. But the campout wasn't all play; Scouts worked on advancement requirements such as swimming and using compasses throughout the trip that began June 20. Troop 52, which started 78 years ago, took 20 new Scouts this year.