Before he registers, Jank, a sophomore computer science major at Idaho, taps into RateMyProfessors.com to “see how teachers are rated, see how hard their classes are, see what kind of teacher they are and how they fit into my paradigm.”

Such Web-based evaluations are the bane of some college faculty. But students are using the sites to avoid tedious instructors and classes with — as one entry on ProfessorPerformance.com put it — “tests that were like having your arm cut off by a cold, rusty spoon.”

An instructor who made John Swapceinski’s life miserable at San Jose State University provided the inspiration for RateMyProfessors.com.

“She was a real ogre. It made me realize that my life for those three to four months would have been a lot different if it hadn’t been for her,” said Swapceinski, now a software engineer in northern California.

Started in 1999, Swapceinski’s site now has nearly a half-million evaluations for more than 113,000 professors at 2,401 colleges and universities in the United States and Canada. A related site, RateMyTeachers.com, posts evaluations from middle and high school students.

Swapceinski, who doesn’t earn a profit from the advertising-free site, said 60 percent of the college postings were favorable to faculty. Kasey Kerber, the founder of ProfessorPerformance.com, estimated that up to 70 percent of that site’s evaluations were positive.

But the American Association of University Professors gives a failing grade to those and other teacher-rating sites, some of which are specific to a single school. The traditional in-class evaluations used by most colleges and universities are good enough, the AAUP said.

“One purpose of student evaluations is to help the faculty to identify general problems and work toward dealing with them,” said AAUP spokesman Jonathan Knight.

“These kind of postings will inevitably focus on student gripes and have no credibility. The purpose it should be designed for, helping the quality of education, is completely lost.” 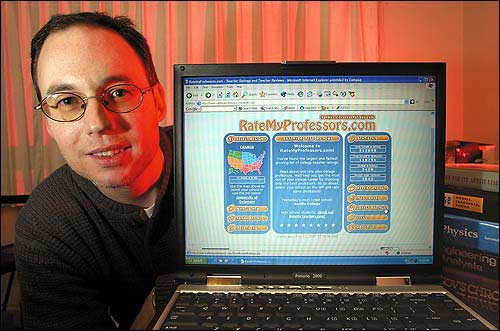 John Swapceinski, president and founder of RateMyProfessors.com, shows off his site at his Menlo Park, Calif., apartment. The site contains ratings of more than 113,00 professors across the United States.

“Our site is no different from the evaluations provided at the end of the semester. The only difference is that students aren’t allowed to see those evaluations,” he said. Both online and institutional evaluations are unsigned.

Like many professors, Patrick Thorpe hasn’t read the critiques of the biology classes he teaches at Grand Valley State University in Allendale, Mich.

Nor does he take the ratings seriously, though there’s “a little happy smile” next to his name, Thorpe noted. That means his ratings are good.

Before posting a rating online, both Web sites review the critiques to remove offensive and potentially libelous content.

Even so, Swapceinski said that each week brings another threat of legal action from an aggrieved professor somewhere.

“It’s amazing,” he said, “the number of professors with Ph.Ds who just don’t get the concept of the First Amendment.”