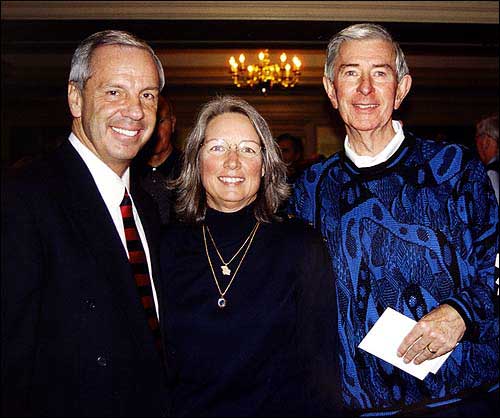 Kansas University basketball coach Roy Williams and his wife, Wanda, join Bob Billings during a January 2002 event to honor Billings and his many contributions to KU. The event was at KU's Adams Alumni Center.

Kansas University lost one of its biggest supporters Thursday.

“There was no more loyal Jayhawk,” KU Chancellor Robert Hemenway said. “Bob Billings was one of the most decent human beings I’ve ever encountered. Everybody had affection for him, and he lived his life in a way people wanted to be around him.”

As a student and as an alumnus, Billings was an important supporter of many KU endeavors. His generosity to the university was noted also by other KU leaders both past and present.

“Bob Billings never said no to a deserving person or idea,” said former chancellor Gene Budig, who ran the university from 1981 to 1994. “The University of Kansas had no better friend over the years. He generously touched all corners and made things better for many people in the university community and in Lawrence. He always gave to needed projects, but insisted on no fanfare.”

Billings came to KU as a Summerfield Scholar and a member of the basketball team. He was a student leader in high school, and that continued at KU, where he majored in economics, business and political science.

Billings was elected student body president in 1958 and was president of Alpha Tau Omega social fraternity. The national fraternity named Billings its outstanding undergraduate in 1959.

One of former KU athletic director Bob Frederick’s memories of Billings is tied to that fraternity. “One of my first thoughts upon hearing about Bob’s death was about the fall of 1958 in a room when he was trying to get me to pledge ATO (social fraternity),” Frederick said. “He was energetic and positive then, always a great salesman. I can’t imagine anyone who has done more for athletics, KU, the town, the state, the area. His energy, spirit, optimism and unselfish use of his resources were astounding. … He was one of a kind.”

While at KU, Billings was vice president of the Sachem senior men’s honor society, a member of Phi Beta Kappa and a KU Hilltopper, the top student award for graduating seniors.

In addition to his leadership role, he was a guard on the KU men’s basketball team, including the notable 1957 squad that made it to the NCAA finals. That team also included Wilt Chamberlain, with whom Billings maintained a lifelong friendship.

He received All Big Eight conference honorable mention honors in 1958, and, in 1959, received the Forrest C. Allen award given to the KU senior athlete with the highest academic standing.

“I can’t tell you the fun Bob, Monte (former athletic director Monte Johnson) and I had in our basketball days and what a tremendous leader and inspiration Bob Billings was. So caring and unselfish. …

“In later years, he did more to help Wilt Chamberlain than just about anyone you could name. I know Wilt appreciated it a lot. He also aided and counseled a lot of athletes, more than you could name, many you may never heard of. I feel honored and dignified to have been a friend and teammate of Bob Billings.”

“It’s a sad day for me personally and I’m sure everyone at the University of Kansas and entire Lawrence community feels the same way,” Williams said. “Bob Billings was a great Jayhawk and a person who gave — every day of his life, some way, somehow — to this university and this town.”

Before leaving KU to devote full-time to Alvamar Inc., Billings spent 10 years as director of what then was known as the Aids and Awards Office, now the Office of Student Financial Aid. Jerry Rogers, who worked with Billings in that office, remembered him as “absolutely the most positive and generous person I’ve ever known. He was always doing something good for somebody and never met a stranger — he would try to help anybody, anytime. …

“I learned and benefited so much from his expertise, intelligence, caring attitude and sense of humor. Don’t ever underestimate how great he was at using humor to handle situations. You’d get one up on him with a joke or some kind of favor, and it would not be long before he would get back at you, only better. You simply could not top him.”

Billings was a sophomore at KU when Emily Taylor arrived there to begin her job as dean of women. Billings’ sense of humor also was part of Taylor’s memories.

“I admired him as a scholar, an athlete, a thoroughly reliable committee member and one of the most decent human beings I’ve ever known,” she said. “He really cared about people, always gave others the credit for anything good that happened. He had a marvelous sense of humor, never used at the expense of anyone else.”

Billings was honored in 1984 with the Ellsworth Medallion, the KU Alumni Association’s highest honor for “unique and significant service to the university,” and in 1988 with the university’s Distinguished Service Citation. He served on the KU Alumni Association Board of Trustees and was a donor to the Williams Fund and the KU Endowment Association’s Chancellors Club. He also supported many other university efforts including the Spencer Museum of Art, Lied Center and the new Dole Institute of Politics.

Bob Dole, the former U.S. senator from Kansas, lived across the street from Billings in Russell.

“Bob was younger than me, but I watched his high school basketball progress and then his playing at KU. I kept track of him over the years,” Dole said.

“He did a lot of good for Lawrence. He was a good, decent guy — that’s the way I’d describe him. He was like that his whole life, he never changed. His dad was the same way.”

Richard Norton Smith, director of the Dole Institute, noted that Billings, his wife, Bev, and his brother and sister-in-law recently pledged money for a stone map of Kansas for the floor of the institute’s entrance.

“The world is full of givers and takers. They’re givers,” Smith said. “The world of politics — and I assume, campus politics, too — is full of people who love to see themselves in print and who wield the personal pronoun like a sword. Bob was the rarity. He loved to do good things, and he didn’t care to get credit for it.”