Area business professionals interested in joining a Rotary club should have a third choice by May, according to the leader of a group interested in starting a new Lawrence chapter of the international organization.

Ed Samp, president of Lawrence’s CornerBank, is leading a group of area residents who hope to form the Lawrence Central Rotary Club.

It would be Lawrence’s third chapter of Rotary International, which is a service organization comprised primarily of business owners, managers and professionals who meet weekly to support charitable causes.

Samp and several other area residents began talking in November about the idea of forming another chapter. They had heard of several people who were interested in joining a Rotary club but the meeting time, location or size of the existing two chapters wasn’t appealing to them.

“I had talked to several people who were a little reluctant to come all the way out to the west side of Lawrence for lunch,” Samp said. “That’s why we thought a club that met somewhere more centrally located might be popular, hence our name.”

Samp said the group, which has grown to 17 people, meets at noon each Wednesday. The group hasn’t selected a permanent meeting place, but it is considering the Lawrence Holidome, 200 McDonald Drive; the Eldridge Hotel, 701 Mass.; and the Lawrence Arts Center, 940 N.H., Samp said.

According to Rotary International rules, the new group needs at least 20 charter members before it can become an official chapter. Samp said he expected the group to get its 20th member within the next week, allowing it to file the formal paperwork this spring. 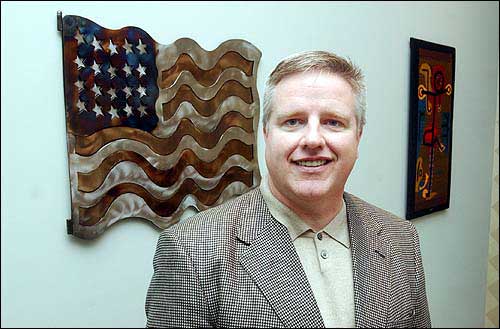 He said the chapter hoped to be officially chartered by Rotary International in May.

The presidents of Lawrence’s two existing Rotary clubs said they didn’t have any objections to the new chapter.

“Rotary is always interested in increasing its membership, so my thinking is the more the merrier,” said Vickie Randel, president of the Lawrence Rotary Club. “We understand that a lot of why a person decides to join Rotary has to do with the when and the where of the meetings.”

Ron Hurst, president of the Jayhawk Breakfast Rotary Club, said he also understood that some people were interested in belonging to a smaller club. The Jayhawk Club has about 90 members and the Lawrence Rotary Club has slightly more than 200 members.

“When we started our club about nine years ago, the thinking was that the original club had grown pretty large and it was difficult to get to know everyone,” Hurst said.

Samp said the new group hadn’t decided what membership fee to charge, but he said it likely would be $100 a year or less, in addition to a weekly meal fee of about $10.