The calls also show myriad attempts by the wives of two university officials to influence Clemons on a range of matters: returning to school, shutting out his former Mizzou coaches, and dating.

The Post-Dispatch this week obtained about 24 hours of conversations in which Clemons discussed everything from life at the Boone County Jail in Columbia, Mo., to the veracity of allegations leveled against the university’s basketball program.

The recordings are of collect calls Clemons made from jail in July and August. At the outset of each call, those on the line were told via a recorded message that the call might be monitored and recorded, as is standard practice for the jail.

Regardless, Clemons and many of the people he chatted with spoke freely, revealing much.

Clemons, 23, served most of a 60-day sentence at the jail after pleading guilty of false imprisonment and third-degree domestic assault. His former girlfriend, Jessica Bunge, accused him of choking her and holding her against her will in January at his apartment in Columbia.

Mizzou and the NCAA have spent months investigating Bunge’s allegations that Clemons told her he received several payments — in cash and checks — from a member of the MU basketball program and that coach Quin Snyder gave him a large assortment of clothing. Bunge also has alleged Clemons received improper academic assistance at Mizzou.

The NCAA also is looking into potential academic issues regarding Clemons before he came to Missouri. 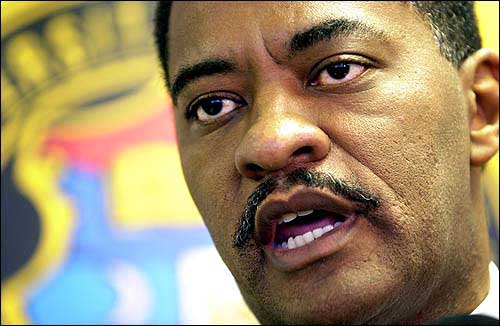 In the jailhouse recordings, Clemons tells others the same things Bunge said he told her about how he got money from coaches. Reached Wednesday by phone and asked whether Bunge’s allegations were indeed true, Clemons responded, “Yeah. Y’all printed it, so it must be true,” and then hung up.

While the university revoked Clemons’ athletic scholarship during his jail stay, he remains enrolled at the school.

Two of the people with whom he spoke the most while in jail appear to have been key to his decision to stay in Columbia and appear to have played a role in his other decisions. They are Carmento Floyd, wife of MU system President Elson Floyd, and Amy Stewart, wife of Ed Stewart, the school’s associate director of athletics for administration.

Several calls the two had with Clemons–sometimes together–suggest considerable infighting and backbiting within the athletics department. Conflict between the department and the university president also were discussed.

In three consecutive phone calls made July 29 to Amy Stewart, she advised Clemons he couldn’t trust assistant coach Lane Odom or the rest of the coaching staff.

“You have got to sever your ties with the basketball staff,” she said. “You’ve got to.”

Stewart told him she didn’t think the coaches cared about him. “They don’t give a damn about where you go to school, or your degree, or anything,” she said.

Several times, Stewart gleefully said she hoped Clemons would “take down” the coaching staff. “Your (rear end) is some trouble. Whew! Shoot, taking ’em down, you are. You’re gonna take ’em down, you know that, right? You know that? And I am having great pleasure.”

In a conversation with Carmento Floyd, the president’s wife told Clemons her husband was upset with athletics director Mike Alden regarding the players’ scholarship being taken away.

“(Elson) was perfectly clear with Mike. . . . ‘You do not touch that kid. He deserves due process,'” she said, describing a meeting between the two men.

Elson Floyd has publicly supported Alden but this summer shifted the university’s internal investigation from out of the control of the athletic department.

Similar to Stewart’s sentiments, Carmento Floyd tells Clemons she doesn’t trust Odom and the others and asks him where the coaches were when Clemons really needed somebody.

Carmento Floyd at one time worked with troubled youths in North Carolina.

Amy Stewart could not be reached via phone or e-mail. Her husband, Ed, released a statement Wednesday.

“While I am deeply disturbed by the contents of the recently released recordings, I continue to support my wife as we go through this extremely difficult experience,” the statement read. “. . . It is extremely frustrating and distressing that I now find myself in the middle of this situation.

“I would like to make clear that I have great appreciation for the leadership of Mike Alden, and that the vision and resolve of our department will not be compromised by these news accounts.”

Asked Wednesday about the jailhouse recordings, Alden said: “When I was made aware of the telephone conversations, I certainly was very surprised that there was that amount of dialogue that had taken place with Ricky Clemons.”

As for whether Alden found it troubling that Ed Stewart’s wife had had so much contact with Clemons, the athletics director said: “I don’t think I would say troubling. I would say that I was surprised. I certainly was not aware of the level of dialogue and the amount of dialogue that had taken place. I respect people and their ability to have opinions.”

Bunge and her father, both reached Wednesday, said they, too, were surprised by the recordings.

“I think that it just shows she was telling the truth on everything,” Dr. Jim Bunge said. “She has never wavered in what she has said.”

Said his daughter: “A lot of people, I’m sure, say I’m probably laughing and smiling … It’s what (Clemons) deserves. But it’s not a funny issue. It’s sad because of how deep it goes, because of all the outcomes it’s had.”

Among the most compelling things Bunge told the NCAA for its investigation is that Clemons had received money from Mizzou coaches.

In a jailhouse conversation with Amy Stewart, Clemons said Bunge would take the money he was given to the bank for him.

In another conversation, Clemons told Stewart he wasn’t the only player getting money: “When I first got here … they did everybody. I mean, they do A.J. (Arthur Johnson) and Rickey (Paulding). If they need money, they’d go to (assistant coach Tony) Harvey. He’d get it for ’em.”

“They what?” Stewart responded.

“If they needed money, they’d go to Harvey. He’d get it for ’em. But it was him first, and I stopped messing with him. I stopped talking to him and … then went to Lane (Odom).”

In statements released Wednesday from the athletics department, Johnson and Paulding each said they had not received “any impermissible benefits, including cash, from any of our coaches.”

Odom could not be reached Wednesday night but previously has denied the allegations.

Harvey also has maintained no such activities occurred.

“Everyone knows that I never really had a relationship with Ricky,” he said. “I can’t make any comment, but when the time is right … I just can’t make a statement right now.”

Each player also said they could not discuss the allegations further, due to the NCAA investigation.

However, asked whether he was bothered a former teammate had said he received payments, Paulding said: “A little. But people are going to say things. That’s part of playing basketball and part of life. So, I can’t get mad every time somebody says something about me.”

Snyder, who has acknowledged giving Clemons two pairs of shoes and a pair of pants, has denied the other claims.

Kay Hawes, NCAA associate director of media relations, reiterated Wednesday the organization’s policy that it does not comment on potential or ongoing investigations.

Hawes said she did not know if there was a precedent for jailhouse interviews being used in investigations.

The NCAA previously had said it hoped to complete its investigation by this month. Elson Floyd met with NCAA officials in Indianapolis last week.

Murray Sperber, professor of English and American studies at Indiana University and author of four books on college sports, said Mizzou could suffer from revelations on the recordings if they were in conflict with what the school previously said.

“Certainly if the NCAA has asked them specifically and they denied it, it could really hurt them,” Sperber said. “But another way the NCAA could get them, and has gotten many, is lack of institutional control if the president and athletics director and Quin deny they knew anything about this.”

After pleading guilty of the attack on Bunge, Clemons served the first 18 days of his sentence in a halfway house in Columbia. He was ordered to jail to complete the term after it was ruled he had violated the terms of his work-release program when he attended a July 4 gathering at the home of the university system’s president.

Clemons was hospitalized after the all-terrain vehicle he was driving at the gathering overturned about 4 1/2 hours after he was to report back to the halfway house. Upon his release July 13 from University Hospital, Clemons was jailed. He is on two years’ probation because of his guilty plea to the assault charge.

Boone County Sheriff Ted Boehm, who was deluged Wednesday with media requests for the jailhouse recordings, said he found it interesting much of the information that has been revealed might not have been had Clemons simply reported to the halfway house as required.

“It’s very simple,” Boehm said. “If he would have just done his 60 days at a noninstitutional facility, which would have been very easy to comply with … you and I wouldn’t be talking today.”