A trio of young artists see a gap in the visual arts scene in Lawrence and they’re taking steps to change that landscape. 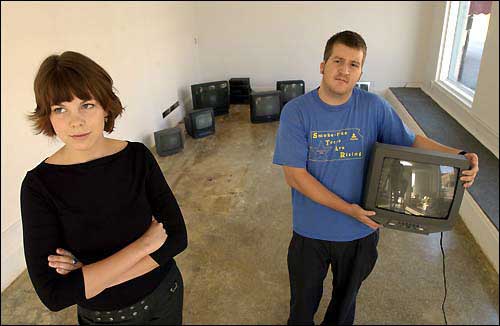 Shelly Horst, left, co-director of the Paragraph gallery, 701 Mass., and Jeff Ruggles, right, co-organizer of the gallery's first show, are preparing for the gallery's opening Saturday night. The show, titled The

“The idea for the gallery started when we were walking past the space,” McGraw said, referring to a storefront within the Eldridge Hotel that formerly housed an antiques shop. “It’s been an ambition of mine to open a venue for contemporary art, events, performances and screenings. Things were already occurring (in Lawrence) but there was no space (in which) to do it.”

Rob Phillips, owner of the Eldridge Hotel, plans to expand the hotel’s bar into the empty shop. But because the space had remained empty for about nine months, Horst, who works at the bar, approached Phillips with the idea of converting the shop into a gallery until the bar project could get started.

“He was so receptive, and things happened swiftly,” McGraw said. “It’s visionary on Rob’s part to see the rewards to his hotel to offer the space to us. It took some faith on his part to offer it up.”

The first exhibition, “The Opening Paragraph,” is a collaborative work by 12 video artists and a sound artist that runs through Oct. 6. The project called for the artists to create 11 video interpretations that are the exact length of the music: 5 minutes, 3 seconds and 10 frames. The videos will be displayed simultaneously.

McGraw said the gallery will sell DVDs of the installation for $20.

McGraw said the Lawrence gallery follows in the steps of the Urban Culture Project, which encourages landlords of vacant storefronts in downtown Kansas City, Mo., to help struggling artists. McGraw is helping with the project.

“Some of the buildings have been vacant for 20 years,” he said. “The landlords give the spaces up free with the idea that they would revitalize the area and make them more rentable. There are seven to 10 new galleries or performance spaces and a dozen artist studios.”

A goal of Paragraph is to strengthen ties between the Lawrence and Kansas City art communities, McGraw said.

“Both have vibrant (arts communities), but there’s a lack of traffic between the two locales,” he said. “The goal is bring people from Lawrence to Kansas City and vice versa to see something they would not expect.”