Privately built Pacific Bell Park a curse to other teams

Pacific Bell Park, host of its first World Series game tonight, is the 41,503-seat waterfront home of the San Francisco Giants with spectacular views of the Bay Bridge and the distant Oakland hills.

What really sets the $357 million downtown stadium apart, though, is its distinction as the only privately financed major league stadium built in the last four decades.

And that is turning into a curse for other teams across the country that have been trying to convince state legislators and voters that tax money is needed to build new stadiums.

In St. Louis, where the Cardinals seek government help for a proposed downtown ballpark, opponents of public funding cite Pac Bell Park as they campaign for a Nov. 5 referendum seeking to restrict the city’s ability to use tax dollars for a new stadium.

In Minnesota, state Sen. John Marty introduced an amendment this year to compel Twins officials to go to San Francisco to see how a privately financed ballpark can be built. It was narrowly defeated.

“If San Francisco can do it, the Twin Cities can do it,” says Marty, who for years has waged an often lonely battle against public funding. “I’m not suggesting it’s easy to do it that way, but if every community could do it the way San Francisco has done it, it would be a lot better for those cities and for baseball.”

The Giants say private financing only worked in their case because they built the park at a time when San Francisco and Silicon Valley were flush with cash from booming technology companies.

“We had a very strong economy in the late 1990s, a strong company base and a storied franchise,” says Giants chief operating officer Larry Baer, who assembled $75 million in sponsorships including $50 million in naming rights fees from Pacific Bell and $75 million from 15,000 charter seat licenses.

Giants president Peter Magowan says most teams couldn’t build a stadium without public funds, and that even the Giants couldn’t do it now.

“You cannot expect a private ballpark to be built in Cincinnati or Milwaukee, there’s not the economic base there. It’s not the Silicon Valley,” he says. “And we couldn’t do it today. We were very lucky in our timing we had low interest rates and a very good economy.” 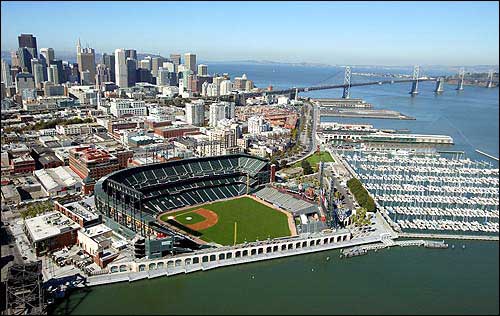 Pacific Bell Park, home of the San Francisco Giants, is shown in this aerial photo of San Francisco. The World Series shifts to Pac Bell tonight when the Giants play host to Anaheim.

Giants owners had no choice but to use private money voters defeated four referendums between 1987 and 1992 that sought public funds for a replacement for wind-swept Candlestick Park, where the NFL’s 49ers still play. Two of those ballot measures would have involved moving the team an hour south to the San Jose area.

Former owner Bob Lurie was so frustrated that he agreed to sell to a group planning to move the Giants to Tampa, Fla., but that deal was blocked by other owners. Lurie ended up selling the club in late 1992 for $100 million to a group headed by former Safeway supermarket CEO Magowan.

Magowan says the new owners lost about $100 million in their seven seasons at Candlestick, but made about $5 million each in 2000 and 2001 the Giants’ first two seasons at Pac Bell Park.

Rob Tilliss, who helped put together the $170 million loan package for Pac Bell Park, says a privately financed stadium is feasible only in cities with huge corporate bases such as New York or Los Angeles, where Dodger Stadium was privately built for $15 million in 1962.

“It definitely is not a one-size-fits-all kind of model,” says Tilliss, head of the sports advisory and finance group for JPMorgan in New York.

Former New York Mayor Rudolph Giuliani signed tentative agreements with the Yankees and Mets to build two new $800 million stadiums, with the city paying half the cost. But new Mayor Michael Bloomberg, citing the city’s projected $4 billion deficits in each of the next three years, has put the plans on hold.

Proponents of public financing promise a ripple effect that benefits businesses around stadiums. Signs of growth are everywhere around Pac Bell Park, which has spawned an urban rebirth in the China Basin area once dominated by abandoned warehouses and rail yards and decaying piers.

A remodeled terminal for the Caltrain commuter rail system, which links San Francisco to its southern suburbs and to San Jose, sits a block away. Exclusive condos and a shopping mall are nearing completion on adjoining land, and waterfront redevelopment is planned.

And just south of McCovey Cove, landfill is being transformed into a planned $1.5 billion biotechnology center anchored by a new campus of the University of California, San Francisco.

San Francisco Mayor Willie Brown credits the March 1996 vote granting the Giants an exemption to waterfront height restrictions, which cleared the way for construction of Pac Bell Park, as a turning point for a city still recovering from the 1989 earthquake.

“When we finally managed to pass the stadium measure, it helped usher in an era of renewed enthusiasm in San Francisco,” Brown says.

It also has been a boon to the Giants’ 23 owners, who range from real estate developers to venture capitalists and people who made their fortunes at high-tech companies such as Yahoo!, Microsoft and Cisco.

If the World Series goes long enough, Magowan says, the Giants could break even or make a small profit this season, even though the player payroll has grown to $75 million.

The franchise Magowan and partners bought for $100 million a decade ago was valued at $355 million earlier this year by Forbes magazine.

The Giants pay $1.2 million in rent each year on the 12.5-acre ballpark site, part of a 66-year lease with the San Francisco Port Commission. Debt payment on the park is $20 million a year.

Magowan doesn’t consider that a snub, saying other franchises need an All-Star Game more. He says the Giants are willing to work with teams trying to put together stadium funding packages.

“Now, no ballpark will be built with only public money,” Magowan says. “What the other owners now understand is we can develop a strategy on how they can do that.”