When Prosoco moved from Kansas City, Kan., to Lawrence in October 1999, company officials said they needed space to grow.

Despite a weak economy, they’re about to make good on their words. 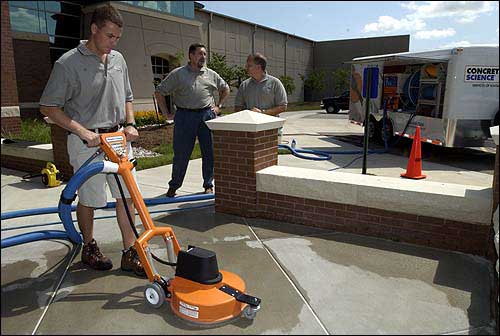 Jeff Plumlee, general manager of Concrete Science Services of Kansas, cleans a concrete patio using products made at Prosoco, a Lawrence-based company. In the background, from left, are David Boyer, president of Prosoco, and his brother Bruce Boyer, vice president of the company. Prosoco recently created an alliance with Concrete Science Inc. to manufacture the cleaning chemicals used in machines made by Concrete Science, like the one above.

The manufacturer of chemical products that clean and protect brick and masonry surfaces hopes to begin work before the end of this year on an expansion project that would add about 53,000 square feet to Prosoco’s existing East Hills Business Park facility and could mean as many as 50 new jobs.

“We’ve just run out of space,” said Bruce Boyer, vice president. “Right now, we’re just confined by the size of our facility. We make enough products in a day to fill up all our warehouse capacity.”

The expansion, being planned directly east of the company’s current plant, would allow the company to nearly double its production schedule and could allow the firm to add a second shift of workers.

Prosoco now employs about 80 people. Boyer said with the expansion, the company would then hire 10 to 15 production employees and 10 to 15 office employees. If the plant added a second shift of workers, that would mean adding another 20 to 25 workers.

Company president David Boyer said the firm had long thought it had good growth potential, but was unable to grow in its old plant in downtown Kansas City, Kan.

“We just had no expansion possibilities in Kansas City,” David Boyer said. “Our facility there evolved with baling wire and duct tape over 45 years. But now we’re here and it’s an exciting time for us. We feel like we’re in a position to take advantage of new opportunities.”

A few weeks ago, the company began a new “strategic alliance” with Minnesota-based Concrete Science Inc., a company that produces what David Boyer said is the “next generation” of concrete cleaning equipment. The alliance, which involved the Lawrence firm taking a 10 percent ownership interest in the Minnesota company, calls for Prosoco to produce chemicals that will be used in Concrete Science equipment.

The alliance is one of the factors driving the company’s expansion. David Boyer said he was convinced new technology Concrete Science is bringing to the market would produce “double-digit” sales growth for his company.

“Their technology coupled with our chemistry just makes a much better mouse trap,” David Boyer said. “It’s just better from an environmental standpoint, and it’s just much more efficient.”

The companies expect to see the products catch on with firms in the business of cleaning concrete surfaces ranging from sidewalks to parking lots.

The new technology combines a power washer with a vacuum cleaner. Unlike traditional power washers, the Concrete Science equipment sucks up water and dirt from the concrete instead of allowing it to run into a storm sewer system.

Bruce Boyer said that was important because cities across the country, including Lawrence, are being forced to meet new environmental standards that limit the type of materials that flow into storm sewers.

“We think this has a lot of potential for us, because we think at some point in time it may become real difficult for people to use the traditional power washing equipment and still meet the environmental guidelines,” Bruce Boyer said.

The alliance is in the early stages. Concrete Science has established franchises in about 10 U.S. cities and is hoping to expand. Prosoco bought one of the franchises and is operating it from its Lawrence offices, serving Douglas and Shawnee counties. The new warehouse space will include about 8,000 square feet for the franchise’s offices.

Building on the boom

But the alliance is only fueling part of the company’s growth plan. The Boyers said growth in the company’s traditional lines of business were more critical factors in their decision to expand.

Prosoco has 85 products as part of is standard line, but owns the rights to 3,400 other specialty chemical formulas that it produces on an as-needed basis for clients.

The company does a large part of its business with architects, construction companies and historic preservation firms that use the products for everything from cleaning concrete and bricks at newly-constructed projects to protecting limestone and other masonry on 100-year-old buildings.

The hallways of the company’s Lawrence offices have the feel of an architectural museum, with photos of many of the world’s most famous buildings hanging on the walls. The buildings all are projects where the company’s products have been used.

They include the U.S. Capitol building, where in the 1980s Prosoco products were used to clean the exterior of the building that serves as the backdrop for presidential inaugurations.

“Because of the inauguration, they painted that portion of the Capitol every four years,” Bruce Boyer said. “We had to clean off about 40 layers of paint, so that made for a pretty interesting project.”

Other high profile projects include the Chrysler Building and Grand Central Station in New York, and the Arts and Industry Building at the Smithsonian.

Although not wanted, the damage caused by the 9-11 terrorist attacks provided additional business for the company.

Crews using Prosoco products were working on renovation at the Pentagon building when it was attacked. They were uninjured but became a lot busier in the days after 9-11 as they shifted gears and began using the company’s products to clean jet fuel and other residue left by the crash of the hijacked aircraft.

And David Boyer earlier this month was in New York, just outside the ground zero area, consulting on a project using Prosoco products to clean buildings that had been coated with grime as a result of the attacks.

The company’s biggest growth, however, began in the 1990s when the country was experiencing a surge in construction activity.

“The building boom that we had a few years ago opened some doors for us,” David Boyer said. “During that time period it was tough for the brick manufacturers to keep up with the demand, so more and more projects started using concrete and other masonry surfaces.”

The move to concrete as an exterior, decorative surface forced the masonry industry to become more concerned with ways to clean concrete and preserve it.

“The expectations for what concrete is supposed to look like really began to increase, and that played in very well to what we had been doing for decades,” David Boyer said.

The slowdown in the national economy hasn’t caused a steep drop in business for Prosoco. In fact, David Boyer described the company’s financial performance as going “gangbusters” during the first quarter of this year.

“It has tapered off a little bit over the last month or so,” David Boyer said. “We’re still seeing sales growth in the single digits, but we expect to get back up to double-digit sales growth by the end of the year.”

He’s counting partially on the Concrete Science alliance to boost sales, but also believes the national slowdown actually may help the company’s private label program. That program produces cleaning and preservation chemicals for other companies. Therefore, the chemicals are sold under a different brand name rather than the Prosoco brand name.

The company provides those services for about a half dozen firms, but David Boyer said that number would grow because many brick and masonry manufacturers will be looking for new revenue streams during these lean times. Getting into the business of selling cleaning and preservation supplies for their products likely will be a popular choice for many of the companies.

“We feel like companies that were doing quite well with their traditional businesses are now going to be more eager to look for strategic alliances, and we should be well positioned to take advantage of that,” David Boyer said.