R. Wayne Nelson wasn’t just a teacher of music; he was “Mr. Music” to students in the Lawrence school district, where he worked from 1948 until 1976.

On Sunday afternoon, dozens of former students, plus friends and family, honored Nelson’s 90th birthday with a surprise party. 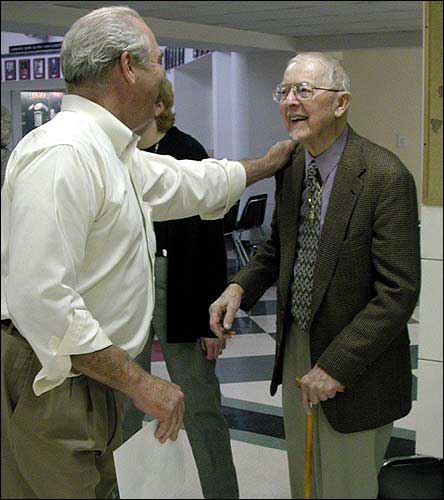 Larry Midyett, left, a former choir member congratulates R. Wayne Nelson after going through the receiving line. Former students and education associates honored the 90-year-old Lawrence resident with a surprise birthday party Sunday at Lawrence High School. A plaque with Nelson's likeness was unveiled and will be placed outside an LHS music room to be named for him.

Former students and colleagues spoke about his role in their lives. Nelson, who received a plaque, also gave a short piano performance.

Judy Allen Morris, a 1956 Lawrence High School graduate, said it wasn’t until her junior year that she discovered Nelson’s name was “R. Wayne,” not “our Wayne.”

“I thought everybody was referring to ‘our Wayne,'” she told Nelson. “It continues to express how we felt for you then and how we feel about you today. You’ll always be ‘our’ Wayne Nelson.”

Nelson was director of choral music at LHS from 1948 until 1966. He founded the A Cappella choir in 1954, composed the school’s alma mater and established the popular “For You A Song” spring concerts, now known as the “Showtime” concerts.

From 1966 to 1976, Nelson was director of cultural and fine arts in the Lawrence school district, where he trained and inspired the next generation of music educators in town.

Lew Tilford, choral director at LHS from 1970 to 1987 and director of cultural and fine arts in the Lawrence school district from 1987 to 1999, said he learned his job from Nelson.

“Lawrence, Kansas, has a reputation nationally for being outstanding in arts education,” Tilford said. “He laid the groundwork for that.”

Nelson said his time as a music teacher was a wonderful experience.

“I’m 90 years old today because I had this wonderful association with students and parents,” he said. “There’s just no words. Lots of tears, but no words. Thank you.”

Dave Buhler, a 1962 LHS graduate, said Nelson gave him a lifelong appreciation for music and his experience in choir gave him confidence.

“As a kid in school, all the other teachers were Mr. or Mrs.,” he said. “R. Wayne allowed us that familiarity. On the other hand, problems were not part of the class.”

Patty McGrew, Lawrence, helped organize the event and said students loved Nelson because he would arrange popular songs for students to sing alongside the more traditional classical repertoire. He also inspired students to do their best.

“He really gave us all a lot of self confidence,” she said. “Even if we didn’t go into music, we can thank him for that.”

Nelson said he was lucky to teach from the 1930s to the 1960s, what he called “golden years,” when most children had two parents and students were largely free from drugs and social problems.

“They were unspoiled children,” he said. “It’s a totally different situation that we have today.”

Nelson said he was proud of the growth in music education. When he came to Lawrence in 1948, there were very few music students or teachers.

“We started from scratch and just built from there,” he said.