Anthem denial is first in U.S.

Topeka ? Saying it would have cost the state too much, Insurance Commissioner Kathleen Sebelius on Monday rejected an Indiana company’s bid to gobble up the biggest health insurer in Kansas.

“I am denying this takeover because it would have cost Kansas businesses, small employers and families millions of dollars in additional health insurance premiums,” Sebelius said at a news conference. 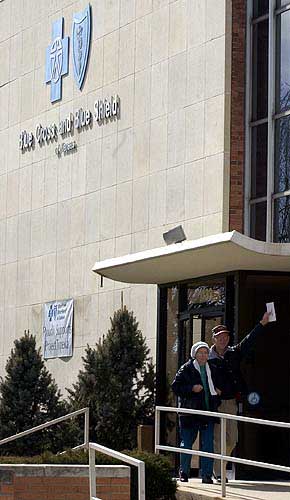 The rejection also stops the proposed disbursement of $320 million by Blue Cross of Kansas to 172,000 policyholders an average payment of $1,500 per policyholder, with many of those policies owned by senior citizens.

The disbursement was part of the plan to transform Blue Cross of Kansas from a company owned by policyholders into one owned by stockholders. Policyholders voted overwhelmingly for the proposed transformation. But the plan drew opposition from many Kansas doctors, hospitals and nurses, as well as an advocacy group for poor and working-class families.

Graham Bailey, a spokesman for Blue Cross of Kansas, said he was “terribly disappointed” by Sebelius’ decision. The insurer had argued it needed to join Anthem to remain competitive. 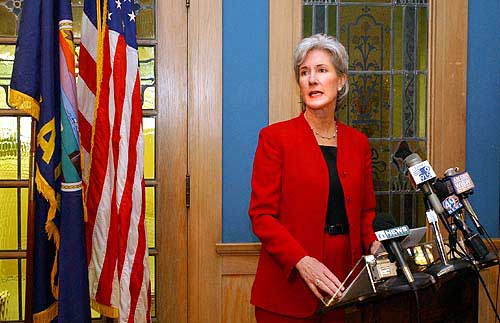 John Knack, chief executive officer and president of Blue Cross of Kansas, and officials from Anthem, said they would study Sebelius’ order before deciding whether to appeal to state district court.

Blue Cross of Kansas officials were quick to note the company is in good financial shape and that Monday’s ruling will not have an immediate effect.

“We are very viable, very healthy. The reason we wanted to do this now is that we could pick our partner,” Bailey said.

Organizations representing hospitals, doctors, nurses and advocates for the poor praised Sebelius’ decision. They had said an Anthem takeover would hurt health care quality because Anthem would cut corners to make higher profits.

Gene Meyer, chief executive and president of Lawrence Memorial Hospital, said Sebelius made the right decision. He said Blue Cross of Kansas succeeded in working through a normal down cycle in the health insurance business.

“Now they have an opportunity to work with providers and consumers to maintain their strong position,” he said.

Blue Cross of Kansas had said it needed Anthem to help it increase its market share and spread its risk over a larger base of customers. Blue Cross has 45 percent of the Kansas market, with policies covering 400,000 people. Another 315,000 people have plans that are administered by the company.

But Sebelius rejected the arguments. She said Blue Cross of Kansas “is well-run, efficient and fiscally conservative, and will be into the future.”

Earlier, a team within the Kansas Department of Insurance said if the deal went through, policyholders would have paid an additional $248 million in premiums during the next five years to meet Anthem’s profit goals. Sebelius said that was a conservative estimate.

Carolyn Micek, a self-employed acupuncturist in Lawrence, would have received about $400 from the disbursement, but she said she was pleased Sebelius rejected it. She said it seemed that Blue Cross of Kansas was trying to pay off policyholders so it could increase its profits in the long run.

“I am so proud of Kathleen Sebelius. I feel like she really looked at all the information and was looking out for what was best for Kansas,” Micek said.

The decision by Sebelius marks the first time Anthem has been rebuffed in its acquisition attempts, according to Dawn Touzin, a project director for Community Catalyst, which has monitored Anthem’s actions in other states.

“This is precedent setting,” said Touzin, who testified against the takeover in Kansas.

She said in most states, Anthem acquired Blue Cross plans that were in financial danger. This was not the case in Kansas, she said.

“Clearly, this Blue Cross was viable,” she said.

May 30: Blue Cross and Blue Shield of Kansas announces plan to become a wholly owned subsidiary of Anthem Blue Cross and Blue Shield of Indiana.Oct. 25: Blue Cross of Kansas board of directors votes in favor of the deal, which would convert the insurer from a mutual insurer owned by its policyholders to a for-profit company owned by shareholders.Dec. 4-14: Hundreds of policyholders turn out to make their views heard at public comment meetings in Hays, Garden City, Wichita, Pittsburg and Topeka.Dec. 24: Lawrence Memorial Hospital Chief Executive Gene Meyer says he opposes the deal, saying it’s not in the best interest of Kansas patients.Dec. 31: Analysis by a Kansas Insurance Department team determines significant premium increases as a result of the deal would outweigh any benefits.Jan. 3: Kansas Medical Society, Kansas Hospital Assn., Kansas State Nurses Assn. and Kansas Association for the Medically Underserved voice opposition to the deal.Jan. 7: The Lawrence school district adds its voice to the chorus against the deal. Without taking a formal vote, the school board accepts the decision of a committee that explored the issue.Jan. 8: Lawrence City Commission votes unanimously to oppose the sale.Jan. 7-9: In three days of public hearings, Kansas Insurance Commissioner Kathleen Sebelius hears arguments for and against the sale. On the first day of hearings, Blue Cross of Kansas and Anthem asked Sebelius to bar testimony from those opposing the deal. She denied that request. The hearing included 30 hours and 1,600 pages of testimony.Jan. 14: Promised an average cash payment of about $1,500 each, policyholders of Blue Cross and Blue Shield of Kansas vote in favor of a deal that would allow the company’s sale. The final tally was 63,504 policyholders for the sale and 36,618 opposed, or 63.4 percent to 36.6 percent.Jan. 18: Blue Cross of Kansas and Anthem begin a statewide newspaper, radio and television advertising campaign to respond to media coverage and critical comments made by opponents of the transaction.Jan. 25: The Kansas Medical Society, Kansas Hospital Assn., Kansas Association for the Medically Underserved and Kansas State Nurses Assn. file papers opposing the deal.Jan. 25: Anthem offers $25 million to establish a fund that would help stabilize premium rates for small businesses if the transaction is approved.Feb. 11: Sebelius denies takeover of Blue Cross of Kansas by Anthem.