Haskell Indian Nations University is mourning the loss of a good friend.

Sally Halvorson, the school’s director of computer services, died Monday in a car accident on U.S. Highway 40 near Big Springs. She was 62. 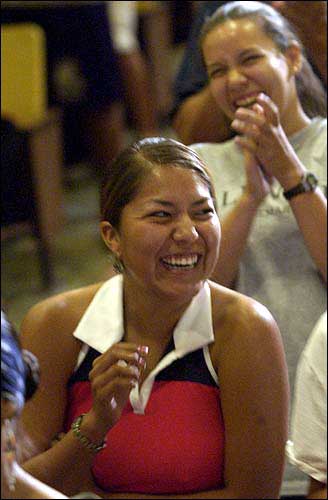 Natasha Miles, a sophomore from Window Rock, Ariz., is among the crowd listening while members of the Haskell Indian Nations University football team lead students in singing the Haskell school song. Faculty and students attended the fall convocation Tuesday on the Haskell campus.

“She was a very important member of the Haskell community. The fact that she will not be with us comes with great sadness,” Haskell President Karen Swisher said during convocation services Tuesday.

Halvorson had worked at Haskell for 13 years.

“Sally was as stubborn as the day is long and I mean that in a good way. She was a fierce defender of Indian education, Indian people, and she loved Haskell,” said Marvin Buzzard, Halvorson’s boss and vice president in charge of university services.

“The value of that (donated) software is now over a million dollars,” Buzzard said. “She’s responsible for that.”

He added, “She really meant a lot to us.”

A memorial service for Halvorson is planned for 2 p.m. Friday at Haskell Auditorium.

During convocation, Haskell registrar Manny King announced the deaths of Brandon Eaglebull, a Sioux student from the Pine Ridge reservation in South Dakota, and Eric Taylor, an incoming freshman from Idaho Falls, Idaho.

Afterward, King said he did not know how the students had died.

Casey Douma, president of Haskell’s student senate, received a standing ovation for his speech, reminding the 400 students, faculty and staff of their obligation to take advantage of all that Haskell has to offer.

“We can’t be selfish,” Douma said. “We don’t come here for ourselves. Whether we know it or not, our people, our tribes, are depending on us.”

He compared Haskell to “one big reservation.”

On Tuesday, 856 students had enrolled at Haskell. Roughly 150 students had applied and been accepted but did not show for classes.

Swisher said the university would not fill the 150 vacancies.