Stephen Hill’s family has been in the business of “green” power for more than 100 years.

It was 1879 when his great-grandfather, Justin D. Bowersock, took over Bowersock Mills and Power Co. He used Bowersock Dam, built in 1874 and named for him after he acquired it, to harness the energy of the Kansas River and convert it, first to mechanical energy and later to electricity for businesses that lined the river and Lawrence’s downtown in the late 19th century. 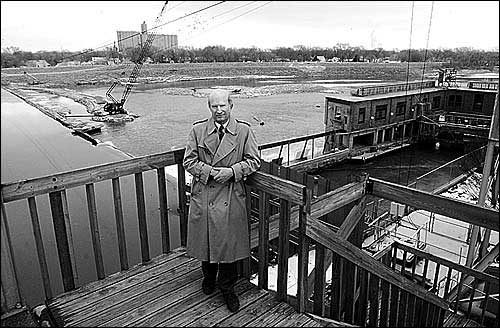 Stephen Hill, great-grandson of J.D. Bowersock and president of Bowersock Mills and Power Co., stands on a landing at the company. In the background a crane crew works on Bowersock Dam, which has eroded over the years.

“It was the main source of power for the town,” Hill said.

That has changed, of course, because the city’s growth has outpaced the capacity of the dam, which spans the Kaw just north of City Hall. Now the company wholesales its product to energy giant Western Resources Inc.

Besides being a legendary fixture in the city’s energy history, the dam also has served an irreplaceable function in providing a growing community with drinking water through the years. The dam creates a pool from which water department intakes filter water to the Kaw River Water Treatment Plant, where it is treated and sent on to Lawrence residents.

It was with that function in mind that the city, which has maintained the dam since 1977, forked over nearly $2 million for a recent structural facelift.

The maintenance should ensure the dam’s integrity for years to come.

Maintenance work, which began in August 2001 and was completed in March, included replacing sheet piling on the downstream face of the dam. Sheet piling consists of steel sheets, which are driven down to bedrock to prevent the dam from being undercut by the river’s downstream flows.

The project was slowed in early February when workers discovered a 22-foot-wide hole that went about halfway through the dam. It required that they ask the city for $105,000 in additional funding to complete the project, putting its cost about $400,000 more than city officials had originally estimated.

“It’s just part of keeping the dam in good health,” Hill said. “Everything in the world is wearing out. Dams wear out periodically, too.”

Keeping the dam in working order is good for posterity’s sake, Hill said.

“We’re a vital part of the history of Lawrence,” he said. “We’d like to keep it operating as long as we can break even.”

Unless the electrical energy market is deregulated, Bowersock Mills and Power Co., the only hydroelectric power company in Kansas, can’t sell power to individuals interested in paying for a more environmentally friendly source of energy. But that doesn’t stop Hill from thinking back to a time when Lawrence streetcars and businesses were powered by his family’s company.

Back when Lawrence, Kansas City and Leavenworth were close to the same size, Lawrence officials saw the dam and its capacity to generate power as a leg up in drawing business to the community.

“It gave Lawrence a little bit of an edge,” said Steve Jansen, a historian at Watkins Community Museum of History, 1047 Mass.

Elevated cables ran along the south side of the Kaw. The cables connected the dam’s water wheels to businesses through a pulley system that provided mechanical power.

“There were pulleys running down alleys between Massachusetts and New Hampshire and Massachusetts and Vermont,” Hill said. “If you were a business person and you wanted to get energy from Bowersock, you ran a leather belt out your window and tied it onto a pole. Energy was transmitted by pulleys and leather belts.”

In 1888, the plant began providing electrical energy, Hill said. Instead of driving leather belts, the turbines were attached to generators, which produced electricity that was then transferred through wires to customers.

But by then the energy needs of Lawrence had far outstripped the 2,400-horsepower capacity of the company’s generators.

Hill continues to hold out hope that the government will deregulate the energy business, giving him the opportunity to sell his cleaner brand of electricity to Lawrence customers interested in a power source that produces no toxic emissions and does not contribute to global warming or acid rain.

“We would like to do that,” he said. “What we have to offer is not a lot. We probably could sell enough power to take care of 1,500 homes. But it’s something we believe in. It’s renewable energy.”