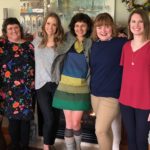 About three months after giving their 30 days’ notice at Bert Nash Community Mental Health Center, a team of specialized therapists met with the Journal-World to discuss their new business, the DBT Center of Lawrence.

The group of six, who spent roughly 50 years combined at Bert Nash, are practitioners of dialectical behavior therapy, or DBT. They are largely focused on the future; however, they also shed some light on their reasons for leaving the CMHC.

DBT is an evidence-based treatment that psychologist Marsha Linehan developed. It is widely recognized as the gold standard of treatment for borderline personality disorder.

Derusha said DBT targets clients who have a lot of chaos, misery or pain in their lives. Clients may have personality disorders or chronic depression that hasn’t responded well to other treatments and therapy methods.

A major goal of standard DBT is to tame impulsivity and help establish control, and to help clients be effective, which in this context means making decisions and following through with actions and behaviors that work, as opposed to focusing on judgments of what’s good or bad, right or wrong, fair or unfair.

Effectiveness also “promotes self-respect, as sometimes we act in ways that achieve our desired result, but compromise our self-respect,” Kostura Polk said in an email response to follow-up questions — for instance, “throwing a tantrum to get someone to listen to you.”

“So many of the people that are best served with DBT are kind of stopped at the door with traditional treatment because they’re seen as intolerable for treaters,” Nelson said. “They’re either too suicidal, too dangerous or too … angry and dysregulated.”

The DBT Center of Lawrence is also offering radically open DBT, or RO DBT, which shifts the focus to clients who are overly controlling of their emotions and behaviors, Derusha said. That could include, for example, clients who have eating disorders or obsessive compulsive personality disorder.

Some elements that set DBT apart

In DBT, the practitioner and the client function more as equals than in traditional therapy. Derusha said the clinician is not seen as the expert telling clients how to live their lives.

“We’re just working together, having conversations and helping the client live the life that they see as a life worth living,” he said.

As an evidence-based treatment, DBT follows methodical protocol because it’s been proven to work.

“When people stick to the protocol, the outcomes are better. In this setting we can better adhere to the way that the model was designed,” Kostura Polk said, which is why she thinks the group will be able to do very effective work at the DBT Center.

Chao said that when clients first enter DBT therapy, the practitioners first assess for safety concerns, such as suicidal ideation and self-harm; then the focus shifts to addressing therapy-interfering behaviors, such as skipping appointments or being late.

“If we’re not working well together, they won’t make progress,” Chao said.

After that, Kostura Polk said, comes meeting basic needs and teaching the many skills of DBT. The skills are broken into four modules: mindfulness, interpersonal effectiveness, emotion regulation and distress tolerance. They’re all broken down in Linehan’s “DBT Skills Training Manual,” and they’re taught in individual and group therapy sessions, both of which are held weekly for each client. 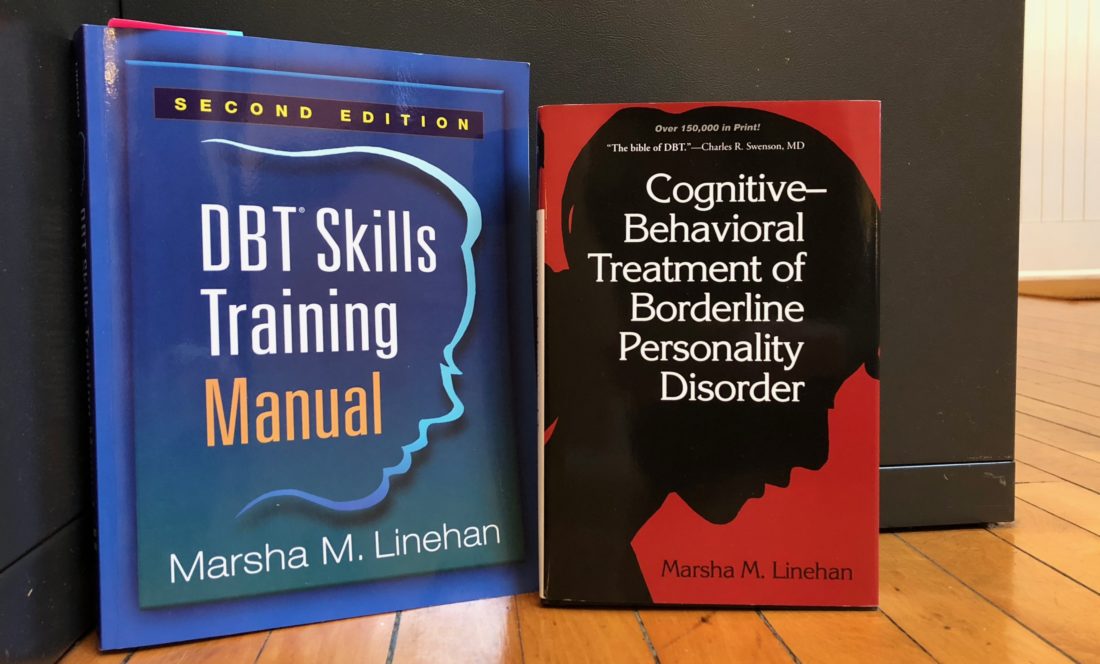 “Whenever you have an urge that probably wouldn’t be effective for you, you can channel it in a different route,” she said — such as wearing outrageous color combinations, showing up in black lipstick or even getting a piercing.

“Feeling a little bit naughty without getting in trouble,” Chao added.

A career, a lifestyle

In some jobs, work ends when you clock out for the day. DBT therapy is not one of those jobs.

Another major component of DBT is coaching. After regular business hours, clients can reach their therapist for “coaching calls” — within reason, and within limits the therapists set with the individuals. The calls function to give a refresher on skills the clients have been practicing in sessions.

That does raise the potential for another therapy-interfering behavior of utilizing coaching in a way that’s unhealthy or exhausting for the therapist, but because of the dynamic of the relationship in DBT, the therapist can address it honestly with the client.

“The therapist can say something along the lines of, ‘When you call me this much, it makes me dread working with you,'” Kostura Polk said.

Also, Chao said the therapists have to practice what they preach and model good behaviors for their clients, including filling out diary cards.

There are some challenges posed in DBT that other practitioners may not face, so it’s helpful that this group functions the way it does. From an outsider’s perspective, the way they interact appears familial.

“We spend a lot of time together outside of work,” Lequesne said. “It’s helped us cultivate a lot of empathy and so when we do face work issues, there’s so much background and so much wholeness to each person that we see, we can understand each other better and use a lot more grace.”

Nelson said with some difficult clients, she has to remember to challenge herself and “do better by this person” — this is what she’s trained for.

“That’s why the whole team is important, because at any given time we might go to each other and say, ‘Yikes. Help me be nonjudgmental, and help me figure out how to be helpful,'” she said.

The overarching theme of why the group left Bert Nash was the desire for greater flexibility.

“For me, a big piece of self-care is having control over my schedule and more autonomy,” Lequesne said. “This opportunity has afforded that.”

Chao said she also wanted to try something different, and she wants to spend more time with her two grandkids.

“This was just a fun adventure,” she said. “I loved the years I worked at Bert Nash, and it just seemed time.”

Derusha, who sees a lot of transgender and nonbinary clients in particular, said being in private practice will allow him to expand his horizons. He has more leeway now, whereas stricter guidelines at the CMHC meant that clients had to be part of the DBT program in order to see him for therapy.

“There are populations that I care a lot about that are underserved, and I want to make sure they have that support,” he said.

Schellenger said she loved her work at Bert Nash and still considers many people there her teammates, but this opportunity was one she didn’t expect for many years.

Kostura Polk said she wanted to stay with her team — she always felt that Nelson, who was the DBT team leader at Bert Nash, was in her corner to support her personally and professionally, and as a group, the six help keep each other grounded.

“Doing DBT, I need that support,” she said. “I’ve been in supervision with Juliet for a long time, and I want to have that same connection that I’ve had.”

Nelson said she’s always thought about entering private practice; that’s the biggest reason she got her doctorate in psychology. During a practicum, she “fell into” Bert Nash and loved the place, the population and the work she was doing.

She said she’s always worked with “amazing” teams, but she felt that this group is special in the sense that it “could actually move and do this work in a way that it’s meant to be done.”

“I almost feel like we were kind of outgrowing the constraints of the center, and everything has growing pains,” Nelson said. “I know that there’s also, politically, new leadership and it has a little bit to do with that. But I think in terms of what I want to say that feels safe to say, and is also true, is that it was time to go.”

The Journal-World first reported on the therapists’ mass resignation from Bert Nash on July 25. Seven total gave 30 days’ notice on July 16. At the time, the center’s CEO, Patrick Schmitz, told the Journal-World that letters had been sent to more than 250 clients who could potentially have been affected.

If they’d staggered their departures rather than leave at once, odds are good that their patients would have been transferred to new practitioners multiple times rather than just transitioning at once. The group acknowledged, though, that there was no ideal way to for them to leave.

“Also knowing that all of us were leaving at once was really painful — they both are hard,” Lequesne said of their options.

Nelson said as hard as it is, she feels good that DBT will still be done, and done well, at Bert Nash.

“There are some really great people that are there still, doing DBT,” Derusha added.

Nelson said the Lawrence community has a need for DBT, which she and the group saw every day — Bert Nash was “overflowing.” She said she thinks both the DBT Center and Bert Nash can be sustained.

“I just think there’s more need for clinical care in general, but specifically for something as integrated as DBT, so that people with more complicated issues can get help quickly and have more options,” she said. 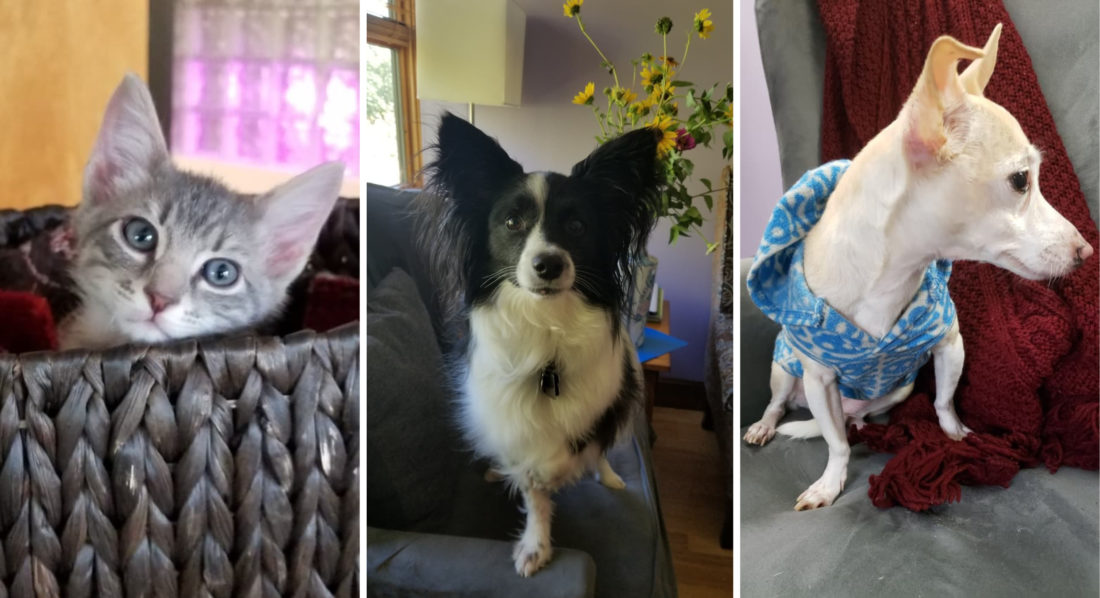 Therapists at the DBT Center of Lawrence told the Journal-World they have seen clients be able to stick to their emotions and be more mindful when they’re petting an animal. Shown left to right are Hamlet, Wallace and Miss Minnie, who have all been of service at the center.

Schmitz had told the Journal-World that Bert Nash would allow its clients to seek therapy with an outside practitioner and still use its other services; the DBT Center group said they will allow that, and some clients already are reaping both centers’ benefits.

There are a lot of services the CMHC offers “that you can only get out of the community mental health center, which is why they’re so important,” Schellenger said. “That’s why it’s really great to have Bert Nash there for that.”

Nelson said the center plans to seek Linehan certification. The DBT-Linehan Board of Certification certifies “individual therapists in their competency to deliver DBT effectively,” and programs “that demonstrate their ability to deliver DBT programmatically with fidelity to the model as it has been researched,” according to its website, dbt-lbc.org.

Individually, Nelson is one of 194 Linehan-certified clinicians worldwide. The closest certified program — one of just 11 nationwide — is about 450 miles away in Rochester, Minn.

“That’s next on our agenda. We’ve got to get ourselves up and rolling,” Nelson said. “There are several things that are included in that process, and we’ve got to make sure we get all those things in place, but certainly we want to position ourselves that way.”

The DBT Center is now credentialed with Blue Cross Blue Shield, and for the time being, it’s handling other insurance providers on a case-by-case basis.