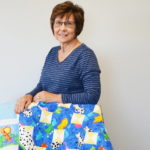 Marla Welch, of Lawrence, holds a colorful quilt intended for a child hospitalized at LMH Health.

The name says it — in so many ways.

But in February 2007, about a year after she left work, Welch entered a clinical drug trial.

“Immediately, I started doing so much better,” she said.

Several years later, the thankful Welch decided she wanted to create a few quilts for children who were hospitalized. Hers definitely was a modest plan. But some friends got involved. Her sister, who lives in McPherson, thought it was a great idea.

When Welch, who moved with her husband to Lawrence from Hoisington in 2004, delivered her first donation of 11 quilts to the hospital in May 2010, it was clear she had exceeded her original idea of making five or six quilts. At LMH Health, Welch was asked to complete paperwork that included her group’s name. There was just one problem: The group didn’t have a name. But then it came to her.

“Pieces. That’s what we do,” she said. “We take pieces and make something out of them.”

Pieces is self-funded. People give scraps of high-quality 100 percent cotton fabric to the group, which at any one time might include six piecers who create the quilt blocks and three or four quilters. And at the hub is Welch — organizing, sewing and ensuring each quilt is washed before it’s donated.

“The nice thing about our group is you get to do what you like to do,” Welch said. “Some people just piece. Some people just quilt. There are multiple hands on each quilt.” 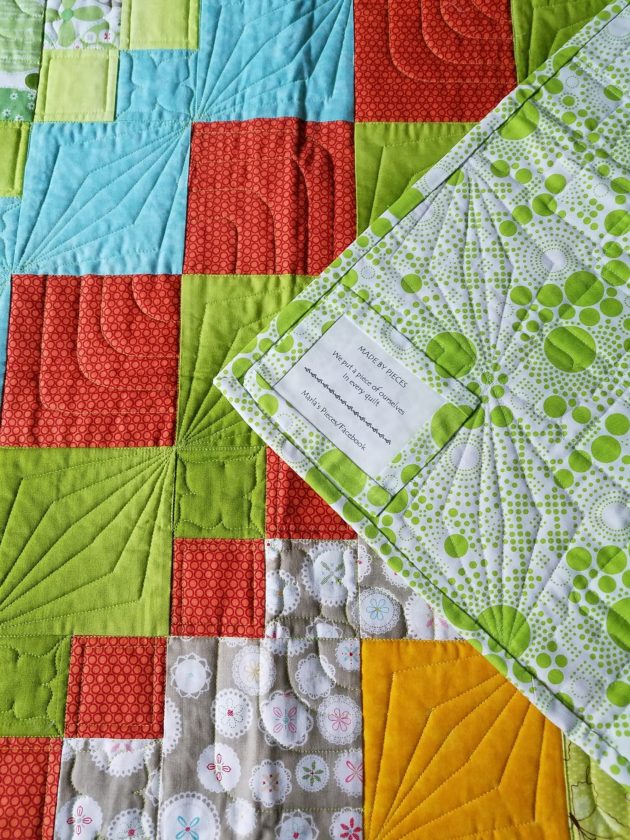 Shown is a quilt made by Pieces, a Lawrence-based group of friends who work together to complete quilts to give to children hospitalized at LMH Health. The tag reads, “We put a piece of ourselves in every quilt.”

Welch and her husband, Greg, a retired educator, recently delivered the 1,500th quilt created by Pieces.

“That’s a little more than the five or six I had planned on,” Welch said, smiling. “It’s truly a labor of love to do this for the kids.”

The former director of the LMH mother-baby and pediatrics department said that love is apparent.

“Each quilt is carefully made with a thought of providing comfort to a child while they are ill,” said Traci Hoopingarner, who now is vice president for clinical care and chief nursing officer. “Marla provides many different quilts that are specific to gender and age. The nurses will look at all of the different quilts and pick just the right one to make that child feel better. … The children will cuddle with them and keep the quilt on the bed. It provides comfort to the child and to the family.”

During the years, members of Pieces have received letters, emails and photographs from those families.

“Although it gives the kids a lot, it has given me so much more,” Welch said. “I named the group Pieces, but because of the kids and the families, this mission has helped me put the pieces of my life back together.”

As a nonprofit hospital, LMH Health serves the health care needs of the community regardless of a patient’s ability to pay. LMH Health receives no tax support from the city of Lawrence or Douglas County and invests all contributions and excess revenues in services, equipment and facilities. So financial gifts to LMH Endowment have a real impact.

Great things are happening at LMH Health. LMH Endowment is on track to provide a record amount of financial support this year — more than $3 million. In addition, LMH Health is going through many changes, including the construction of the new LMH Health West Campus near Rock Chalk Park, the addition of our LMH Health East Heights Family Care clinic near 20th Street and Haskell Avenue, and the renovation of our heart catheterization lab at the hospital. These projects would not have been possible without the support of generous donors.

“We appreciate gifts of all sizes. This year, individual donors to LMH Oncology made possible the purchase of technology worth $100,000 that assists with breast reconstruction procedures,” said Rebecca Smith, LMH Endowment executive director. “There is strength in numbers, and your gift makes a difference.”

Next year, LMH Endowment will celebrate its 50th anniversary with a new name: LMH Health Foundation.

— Caroline Trowbridge is marketing communications manager for LMH Health, which is a major sponsor of Lawrence Journal-World’s health section. She can be reached at caroline.trowbridge@lmh.org.