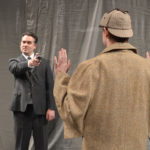 Ryan Hamlin (left) and Christian Johanning rehearse a scene of the play "Holmes and Watson" at Theatre Lawrence on Thursday, January 3, 2019.

A trusty sidekick to one of the greatest detectives in literature will find himself at the center of a story in a Theatre Lawrence show this month.

Rather than the normal story of Sherlock Holmes solving a complex mystery as his sidekick Dr. John Watson chronicles the events for the audience, Watson will be the one trying to solve the mystery in the play “Holmes and Watson.”

“Dr. Watson usually is not the center of attention, but the one who stands back and marvels at (Holmes’) genius,” said Ryan Hamlin, who will portray Watson in the show. “It’s a nice twist on something that has had a lot of versions of lately.”

The play — which has no connection to the movie currently in theaters with the same title — opens at Theatre Lawrence, 4660 Bauer Farm Drive, at 7:30 p.m. Jan. 18. 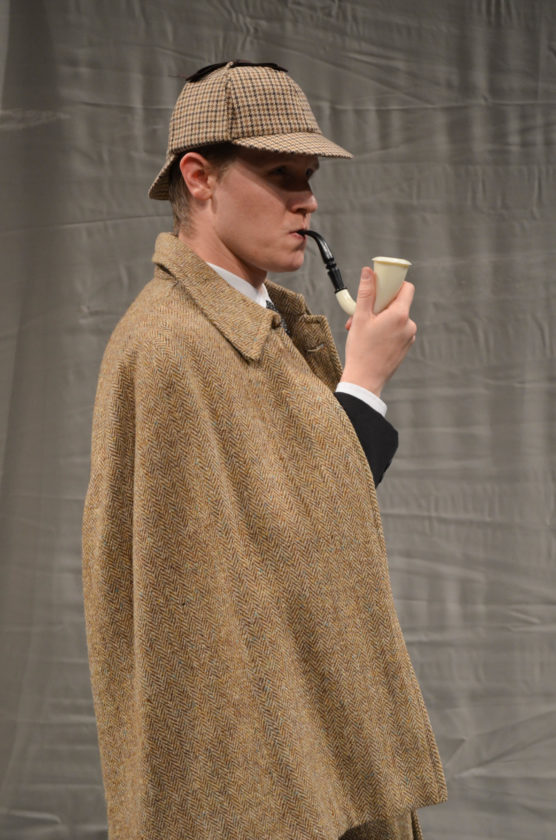 Christian Johanning rehearses a scene of the play “Holmes and Watson” at Theatre Lawrence on Thursday, January 3, 2019. Johanning plays the role of one of the three men claiming to be Sherlock Holmes.

The play is set shortly after the events in Arthur Conan Doyle’s story “The Final Problem,” where Holmes and his nemesis Professor James Moriarty fall off a cliff at Reichenbach Falls, presumably to their death.

Although Holmes is believed to be dead, many frauds have been claiming to be the famous detective, including three men in a mental asylum who all look like Holmes. Watson travels to the asylum to use his own detective skills in hopes that he can reveal one of them as the real Holmes.

“Watson comes to the asylum to try to make heads or tails about what’s going on, but he still feels like it’s his domain,” Orr said of Evans. “He’s not sure about the patients, but he’s also not sure about Watson, because he doesn’t seem to be identifying Holmes right away and (Evans) finds that odd.” 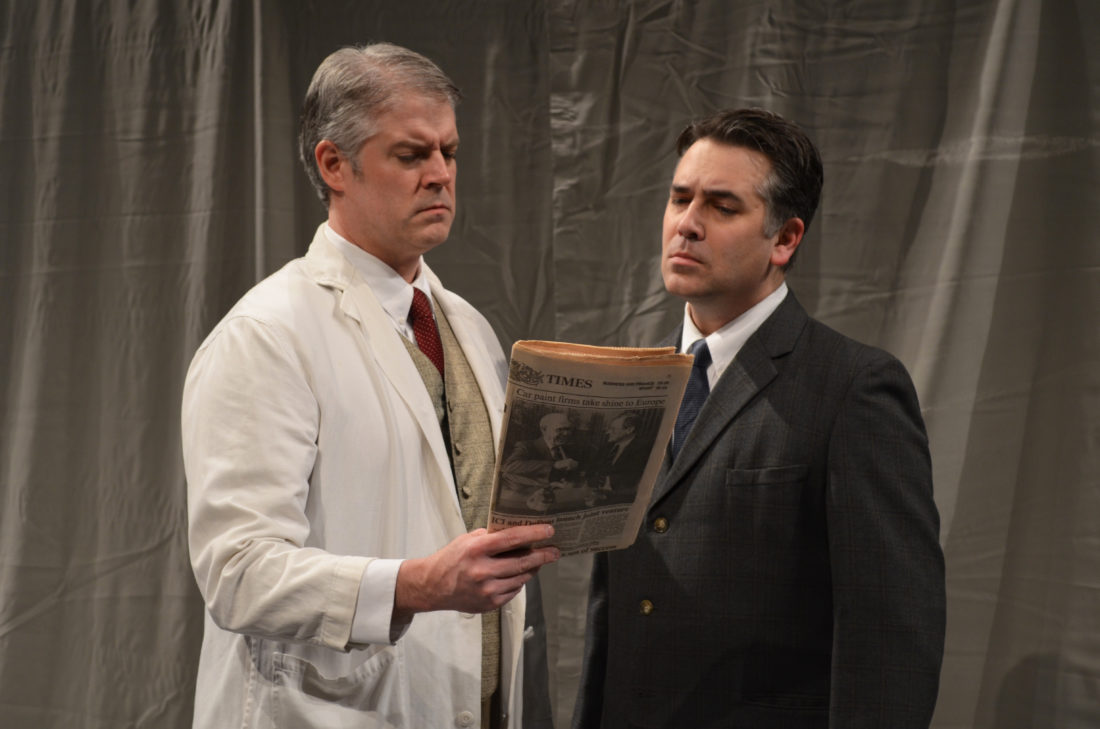 Mark Orr (left) and Ryan Hamlin rehearse a scene of the play “Holmes and Watson” at Theatre Lawrence on Thursday, January 3, 2019.

Although the play is a fresh take on the classic characters, playwright Jeffrey Hatcher provides plenty of references to the original canon by Arthur Conan Doyle, said Dan Heinz, director of the show.

“If you are a big ‘Sherlock Holmes’ fan, you will definitely notice some references from those stories,” Heinz said. “But even if you aren’t, and you just want a good story, it’s a really tightly woven story. I think (Hatcher) did a great job balancing the need to satisfy hardcore fans and making something that is good.”

Heinz said he wants those interested in attending the show to be aware that prop guns are fired throughout the play. But that is also an example of how the story is extremely suspenseful, active and exciting, he said.

“It’s not one of those things where you sit and listen to someone talk for two hours,” he said of the show. “This play really moves.” 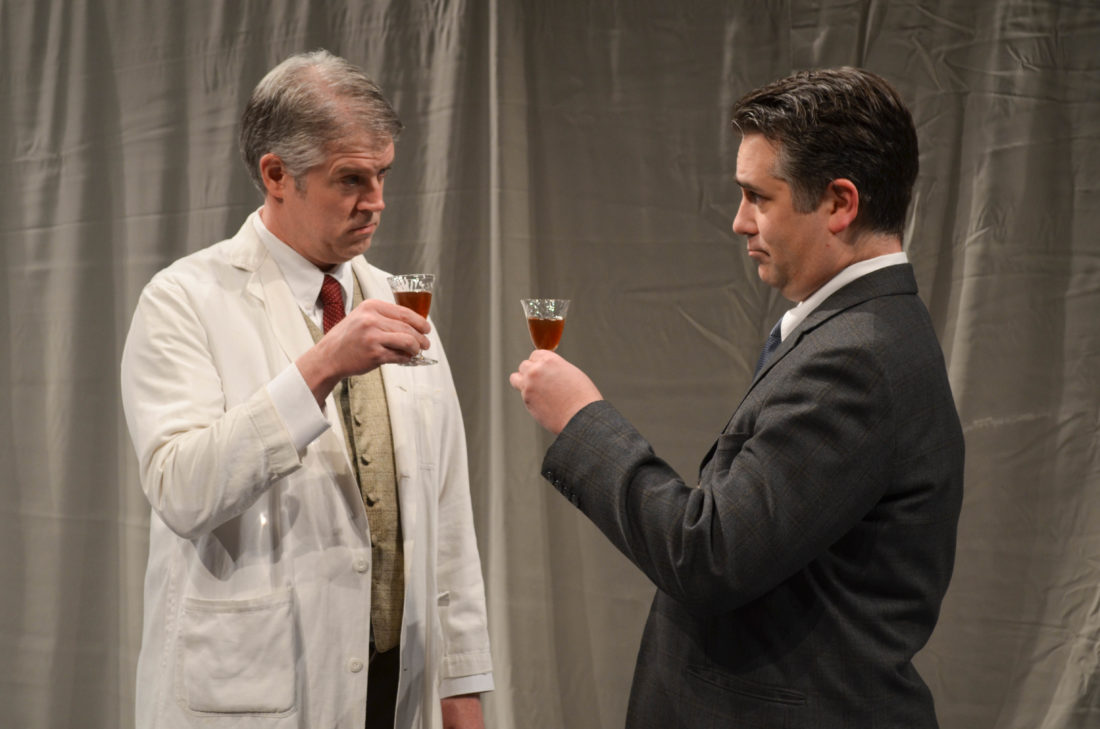 Mark Orr (left) and Ryan Hamlin rehearse a scene of the play “Holmes and Watson” at Theatre Lawrence on Thursday, January 3, 2019.

Mary Doveton, executive director of Theatre Lawrence, said the show may be of interest to those who are fascinated by puzzles and classic “whodunits.”

Holmes and Watson also seem to be characters that writers can’t stop exploring and viewers just can’t get enough of, Doveton said. But Hatcher’s play really stood out to the Theatre Lawrence, she said.

“I think this is exceptionally good because it has so many twists and turns,” Doveton said of the show. “Both for fans of ‘Sherlock Holmes’ and people who just like a good puzzle, it’s a really intriguing show.”

Prior to the Jan. 25 performance, Theatre Lawrence will host a special Scotch whisky tasting event in honor of Arthur Conan Doyle, who was Scottish. The date is also Scottish poet Robert Burns’ birthday, which is a Scottish holiday.