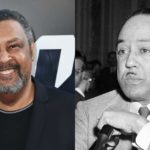 While screenwriter Kevin Willmott is busy with activities surrounding the Academy Awards and his celebrated film “BlacKkKlansman,” he’s already looking ahead to his next project: a documentary about Langston Hughes.

Willmott, a University of Kansas film professor, told the Journal-World recently that he’s excited to help make a two-part documentary film focusing on Hughes, a poet and cultural icon who spent part of his childhood in Lawrence.

The film, “I, Too, Sing America: Langston Hughes Unfurled,” will examine the life of the African-American author who grew up in the Midwest and became a leader of the Harlem Renaissance in the 1920s.

Willmott, who grew up in Junction City, said one of the first books he ever read as a kid about being African American was Hughes’ children’s book “The First Book of Negroes.”

“Hughes is such a personal hero (of mine) and a figure that has deserved a big documentary for a long time,” Willmott said. “People know his name, but they really don’t know his story or his significance. They don’t really know how amazing his story really is.”

Willmott is co-directing the film with Madison Davis Lacy, an associate professor of film at KU who is a four-time Emmy winner, according to a KU news release. The documentary, which will likely air on television, is being produced by a collection of KU scholars and Lawrence Arts Center staff known as the the Dream Documentary Collective.

It may be a while before anyone will have the opportunity to see it. Willmott is currently occupied with activities related to his Academy Award nomination for best adapted screenplay. The 91st Academy Awards will air at 7 p.m. Feb. 24 on ABC.

Willmott, who was in Los Angeles when he spoke to the Journal-World, called being nominated for the award with co-writer Spike Lee “a miracle.”

“It’s very exciting and I’m just going to try to represent Kansas and KU the best I can,” he said.

While Willmott is in Los Angeles, executive producer Randal Jelks, a KU professor of American Studies, is busy raising funds to make the film. Jelks said the film has already received a $50,000 grant from the National Endowment for the Humanities, but the second round of major fundraising is about to begin.

Jelks said the collective was also accepting donations from the general public. Anyone who is interested in helping the film may make donations at the film’s website, dreamdocumentary.org.

Once fundraising is completed, they can get to work, Jelks said. The group hopes to release the film in 2020.

Jelks said he wanted to produce a film on Hughes because a previous documentary about Hughes — “Langston Hughes, the Dreamkeeper,” by St. Clair Bourne, which was released in 1988 — was good but tried to do too much. Jelks said lack of financial support may have been why.

While Hughes is primarily remembered as a poet, his oeuvre includes many types of writing — including memoirs, children’s books, and translations — and he had a global reach, Jelks said.

“It’s an amazing life of artistic production,” he said. “People only know about one part of his artistry, and we are trying to construct a story to tell a little bit more.”

Additionally, Hughes seems to be mentioned frequently in social media and various publications even now, Jelks said. That ongoing relevance, plus his cultural significance to Lawrence, made it an appealing project, he said.

“We have all these filmmakers here (at KU)… Why not do this from Lawrence?” he said.