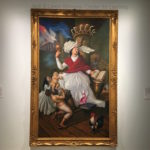 Although many Americans may not know it, Haiti and the United States share an important history, said Cécile Accilien, associate professor and director of the Institute of Haitian Studies at the University of Kansas.

“Haiti is the first black republic to have a successful slave revolt,” Accilien said. “As a result of that slave revolt, you have the Louisiana Purchase, which doubled the size of the United States’ territory.”

KU students and Lawrence residents will be able to explore this connection through an art exhibit at the Spencer Museum of Art this fall, which will feature the artwork of a Haitian-born American and other Haitian artwork. The portrait of purported voodoo queen Marie Laveau, the centerpiece of the exhibit, by Haitian-American artist Ulrick Jean-Pierre will be on display, as will 11 other pieces of Jean-Pierre’s work.

The Spencer Museum of Art selected the portrait to serve as the 2018-19 KU common work of art, pairing with the KU common book “Create Dangerously: The Immigrant Artist at Work” by Edwidge Danticat.

Jean-Pierre, who was born in Haiti and is based in New Orleans, created the portrait specifically for an exhibit called “The Ties that Bind: Haiti, the United States, and the Art of Ulrick Jean-Pierre in Comparative Perspective,” which will be on display in the museum from this weekend through Jan. 6, 2019.

The Marie Laveau portrait features all four of the themes, which also pairs well with the KU common book, she said.

“We like that it featured a woman who had a complex identity,” Mesick Braun said, noting that Marie Laveau had Haitian and Creole heritage.

Each section will feature Jean-Pierre’s work along with the Haitian art the museum owns. The museum received a donation of more than 100 pieces of Haitian art in 2011.

“We’re now one of the most significant repositories of Haitian art in the United States,” Mesick Braun said.

Accilien said Jean-Pierre’s work is interesting because it highlights the connection between Haiti and the United States.

Although some in the United States may only know of Haiti because of the disastrous earthquake that struck the country in 2010 or the negative comments of President Donald Trump, Haiti’s fight for independence from France in the late 1700s and early 1800s led Napoleon to sell France’s Louisiana territory to the United States to help pay for military expenses, Accilien said.

The purchase doubled the United States’ territory and included the land that would later become Kansas.

Additionally, many former slaves in Haiti emigrated to New Orleans in the early 19th century, helping the city’s population to double, she said.

Jean-Pierre’s portrait of Marie Laveau highlights the deep connection between the two countries through New Orleans, which Accillien said can be considered part of the Caribbean like Haiti. She said there are many other ongoing cultural connections between New Orleans and Haiti, including architecture, religion, and food.

Accilien and Mesick Braun find the connections fitting because New Orleans is celebrating its tricentennial this year.

“It just works well to have it all together,” Accilien said.