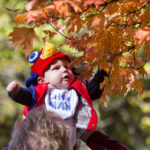 The Maple Leaf Quilt Guild’s annual show will return this year to Baldwin City’s Maple Leaf Festival, which is the third weekend in October, and organizers once again invite area quilters to submit their handiwork for display.

Sharon Vesecky, owner of Quilters’ Paradise, said the quilt guild issues a call for quilts each year for the show but doesn’t start accepting quilts until the Thursday before the show. She therefore doesn’t know how many quilts will be on display, but there are usually about 100, she said.

“We’re hoping for quilts that have a family connection,” she said.

Quilts for display can be left at Quilters’ Paradise, 713 Eighth St., from 10 a.m. to 5 p.m. Thursday, Oct. 18. They may be picked up when the show ends Sunday or after noon Monday.

Midland Railway will treat riders of the historic excursion railroad with a stickup throughout festival weekend. Midland is offering trips to “Nowhere,” an area that the nonprofit railroad owns about a 20-minute ride south of Baldwin City. There, the Wild Women of the Frontier, an all-woman troupe of gun-toting, horse-riding Western re-enactors, will stop the train and relieve passengers of coins and valuables handed out as the train departs from the Baldwin City station.

The Maple Leaf Run is scheduled for Saturday at the Baldwin City Golf Course, 1500 South St. in Baldwin City. The event, which will benefit the Baldwin High School wrestling team, will include a 5K adult run and kids run and a one-mile walk.

Same-day registration for the event will be from 7 to 7:45 a.m. The event will start at 8 a.m. Online registrations can be made at raceentry.com by entering Maple Leaf Run in the “Find Races” link.

It is forbidden for Maple Leaf Festival Parade participants to throw candy, whether on foot, horseback, a vehicle or a float. Those who violate the rule could be denied entry into the 2019 parade. The parade is scheduled for 11 a.m. Saturday.

Tours will be available of the Black Jack Battlefield the weekend of the festival. The site is just south of U.S. Highway 56 on East 2000 Road about three miles east of Baldwin City. The battle between the militias of Abolitionist John Brown and pro-slavery leader Henry Pate is considered by many to be the first armed conflict of the Civil War. Tours of the battlefield will be available at 2 p.m. Saturday and Sunday. Visitors can also tour the restored Robert Hall Pearson farmhouse and hike the site’s nature trail.

Tours will also be available of Black Jack cabin, a re-creation of a homestead from the state’s territorial days located in a U.S. 56 rest area just east of the battlefield. It will be open from 9 a.m. to 4 p.m. on festival Saturday.

Information about the Maple Leaf Festival and its events can be found at its web site, mapleleaffestival.com.