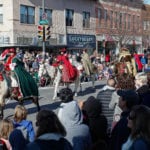 A group of women ride through the intersection of Ninth and Massachusetts streets in downtown Lawrence during the 25th Lawrence Old Fashioned Christmas Parade Saturday, Dec. 2, 2017.

There’s no better way to kick off the holiday season than hearing the clip-clopping of horses in downtown Lawrence, says Elaine VanDeventer, director of Lawrence’s Old-Fashioned Christmas Parade.

The 26th annual parade will include horses of all colors and sizes trotting down Massachusetts Street to celebrate the holiday season in Lawrence. The horses will take to the street at 11 a.m. Dec. 1.

VanDeventer said the event is always well attended, with about 10,000 people lining the street. Local residents are encouraged to grab some hot chocolate and bundle up in a blanket. If the weather is nice, the number can reach up to 25,000, she said.

The event, which began in 1993, originally included 21 entries of horse riders in the parade. In recent years, the count has risen to 85, with many riders bringing more than one horse or mule. VanDeventer said there may be 150 total horses and mules this year.

Marty Kennedy, a longtime organizer for the parade, said many of the horses are local, but some come from other states to participate.

“The most frequent comment from the (horse riders) is how awestruck they are when they turn the corner at Seventh Street and see all the spectators waiting to greet them,” VanDeventer said. “It makes all the time they spend traveling, bathing horses and decorating their vehicles worthwhile when they see all the smiling faces and the delighted waves from children.”

Some of the entries have become a tradition on their own. VanDeventer said the Nicodemus Buffalo Soldiers entry has been participating in the event since the beginning and will return again this year. The purpose of the entry is to educate people on the role that African-Americans played in fighting the Civil War, as well as in settling the western United States.

Because of increasing expenses, Kennedy encourages Lawrence residents to become members of the Friends of the Old-Fashioned Christmas Parade to help pay for meals and security for those traveling long distances. A membership is $200.

VanDeventer said the entries in the parade demonstrate how horses contributed to transportation before the invention of the automobile.

“As well as entertainment, (the event) is intended to be educational so people don’t forget how people’s lives used to be,” VanDeventer said. “That’s what we’re hoping to commemorate: The role of the horse in our history and how important they were to us for survival and our daily lives.”

• Read more about the holiday events and other festivities taking place in the Lawrence area, in our annual Holiday Happenings guide.