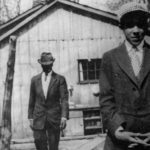 Langston Hughes, foreground, is shown in his boyhood hometown of Lawrence, circa 1914. Hughes left Lawrence a year later to live with his mother in Lincoln, Ill. He eventually moved to New York where he became the literary stalwart of the Harlem Renaissance cultural movement of the 1920s. The man in the background is unidentified. (AP Photo)

Poetry is an art that is meant to be heard, says Lawrence poet Eric McHenry. And now that audible art form will be recognized with a special local award.

As part of the annual Langston Hughes Creative Writing Awards, Lawrence Magazine is funding a new prize to celebrate the performance side of poetry. The Langston Hughes Spoken Word Poetry Prize contest will judge the best spoken-word poetry performance of high school students in Douglas County. Sunflower Publishing, which produces Lawrence Magazine, shares a parent company with the Journal-World.

McHenry, who also teaches poetry and creative writing at Washburn University, will be on the committee judging the submissions. He emphasized the prize would recognize the original spoken method of poetry, which predates writing.

“It’s originally an oral art form,” he said. “The poems that I’ve loved the most have a lot more in common with song than with prose. In a way, creating an award for spoken word poetry is creating a link to poetry’s roots and history.”

Interested students may submit an audio or video file no longer than seven minutes of a performance of either an original piece or a Langston Hughes poem to langstonhughesspokenword@sunflowerpub.com. The contest is free to enter; the submission deadline is Jan. 15.

The new award is also partly a celebration of McHenry’s recent discovery that Hughes, who spent part of his childhood in Lawrence, may have actually been born a year earlier than previously believed. According to McHenry’s discovery of newspapers mentioning Hughes’ birth, he was actually born in 1901 rather than 1902.

The award also fits Hughes very well. McHenry said his poetry was songlike and conversational and clearly meant to be performed.

“I would have trouble thinking of a better poet to name a spoken word prize after than Langston Hughes,” he said.

Other members of the committee, including local poet Leah Sewell, said the award recognized a form of poetry that was currently thriving.

“It’s just exploded in popularity, and it’s really relevant,” Sewell said. “Whenever people say poetry is of a bygone era, you really only need to point to spoken-word poetry to indicate that it’s not only alive and well but thriving.”

Sewell said spoken-word poetry has also been a great way for teenagers to express themselves at an important time.

“It’s definitely a force to be reckoned with among younger poets, who have a lot to say politically and personally,” she said.

Marty Hillard, another local poet on the committee, said he thought it was important for poets to bring their “personal truth” to each poetic piece. He said the performance aspect of poetry allows for a poet to make a more profound connection with listeners.

“Every time I get on stage I feel like it’s such a rare opportunity to be able to occupy space on stage and bare my truth,” he said. “I’ll be looking for a young person who is using that platform to share a part of themselves and connecting on a deeper level with the audience.”