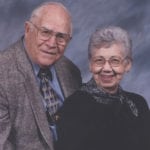 Harry and Virginia Kreider, Lawrence, will celebrate their 70th wedding anniversary today with family.
They couple were married May 30, 1939, at the First Christian Church, in Horton.
They lived in Effingham for 18 years before moving to Lawrence in 1964. Harry worked for Kansas University for 19 years before retiring in 1983. He also served in World War II in the European theater. Virginia was a cosmetologist. She managed the beauty shop at Presbyterian Manor for eight years and worked at Hallmark Cards Inc., both in Lawrence, for 10 1/2 years. She is retired.
They have two daughters, Donna Smith, Kansas City, Mo., and Harriet Hamon and husband Gary, Lawrence; four grandchildren and seven great-grandchildren.