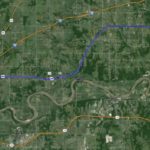 Google Earth map showing the distance covered by the pursuit.

A Kansas Highway Patrol Trooper attempted to stop a vehicle in north Lawrence early Sunday. The driver of that vehicle didn’t stop and ended up leading police on a 25-mile pursuit through parts of three counties.

Around 12:20 a.m. a Trooper reported spotting a vehicle that had been reported stolen from an address in Lawrence, and attempted to stop the vehicle, near Interstate 70 and North Third Street. The driver sped up and the chase was on. A nearby Lawrence officer joined the pursuit as they turned eastbound on U.S. 24.

Speeds reached 70 miles per hour as they passed Lawrence Municipal Airport and then turned eastbound on Kansas Highway 32, crossing into Leavenworth County.

The Trooper reported speeds of 80 miles per hour as they approached Linwood city limits.

As the chase crossed into Wyandotte County and the city of Bonner Springs, officers with the Bonner Springs Police Department were able to hit three of the suspect vehicle’s tires with spike strips.

Speeds dropped to the 55 miles per hour speed limit as the chase continued through the eastside of Bonner Springs, still on K-32.

The chase came to an end about a mile inside Edwardsville city limits, at mile marker 22, just before 12:50 a.m.. The Lawrence officer and the Kansas Highway Patrol Trooper were then able to take the driver into custody without further resistance.

Lawrence Police confirmed that the vehicle was stolen. The Trooper learned that the driver has a felony warrant for his arrest out of Leavenworth County and does not have a valid driver’s license.

After about 10 minutes in custody, the suspect requested an ambulance, because he wasn’t feeling well. An ambulance from the Kansas City, Kansas Fire Department responded, but did not transport the man to the hospital. The Kansas Highway Patrol Trooper transported the man back to Lawrence and Lawrence Memorial Hospital for treatment.

The Kansas Highway Patrol says no officer were injured and no police vehicles were damaged during the pursuit.