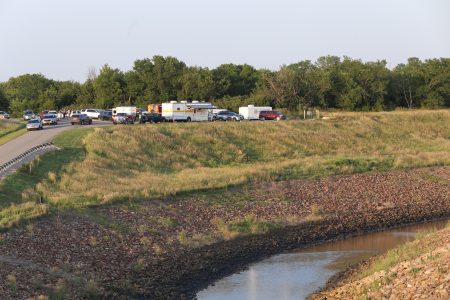 Douglas County first responders stage at the Clinton Lake outlet during a water rescue on July 18, 2019.

The 13-year-old Lawrence boy who drowned after swimming near the Clinton Lake outlet Thursday evening has been identified as Jayion Harris-Jordan. His body was recovered Friday morning, according to the Douglas County Sheriff’s Office.

The boy had been playing in the water with others east of the Clinton outlet when he went under, the sheriff’s office said in a tweet Friday morning.

“He was recovered this morning not far from where he went under yesterday evening,” the sheriff’s office said.

The outlet at Clinton connects the lake with the Wakarusa River to the east.

The sheriff’s office tweeted earlier that “This is a very difficult time for his family and friends and our thoughts are with them.” The office said that it would “not be releasing any other information regarding the incident.”

“My thoughts and prayers are with Jayion’s family, and also with his teachers, classmates, and entire school family,” Lawrence Superintendent Anthony Lewis said in a statement.

Morgan Hill, one of Jayion’s teachers at Liberty Memorial Central, expressed shock Friday afternoon at the news of Jayion’s death.

“I spent much of the day every day last year with him at Central and had the pleasure of getting to know him as such a smart, silly and incredibly talented young man,” Hill said. “His personality was huge and everyone who knew him is surely feeling this loss. My heart hurts for his mom, his brothers and family, as well as for his friends. He had such a bright future ahead of him as he was a gifted athlete, writer, actor and comedian.”

Jayion was also a member of the Boys & Girls Club, according to an email from LMCMS Principal Sabrina Tillman-Winfrey that was shared on social media by the school. He had previously attended West Middle School and Kennedy Elementary School, she said.

“As a school community, our hearts go out to Jayion’s family, his teachers, and friends,” Tillman-Winfrey wrote in the email. “We plan to share this news with school families on Monday, once Jayion’s family has had an opportunity to grieve.”

First responders from area agencies including the sheriff’s office, Lawrence Police Department, Lawrence-Douglas County Fire Medical, the Kansas Department of Wildlife, Parks and Tourism and more were called to the lake for the search about 5:50 p.m. Thursday. The search was suspended around 9:30 p.m. Thursday, and Douglas County Sheriff’s Office Lt. Kristen Channel said at the time that the search would resume Friday morning as a recovery effort rather than a rescue. She said the department had no reason to believe the boy was not still in the water.

The U.S. Army Corps of Engineers turned off the water at the outlet, which would cause water levels to lower, shortly after the call came in. First responders closed off the parking lot near the lake’s spillway and some areas of Mutt Run Dog Park Thursday evening and Friday morning during the search, and a LifeStar helicopter had been flying over the scene Thursday to assist in the search before sundown, a Journal-World reporter at the scene observed.