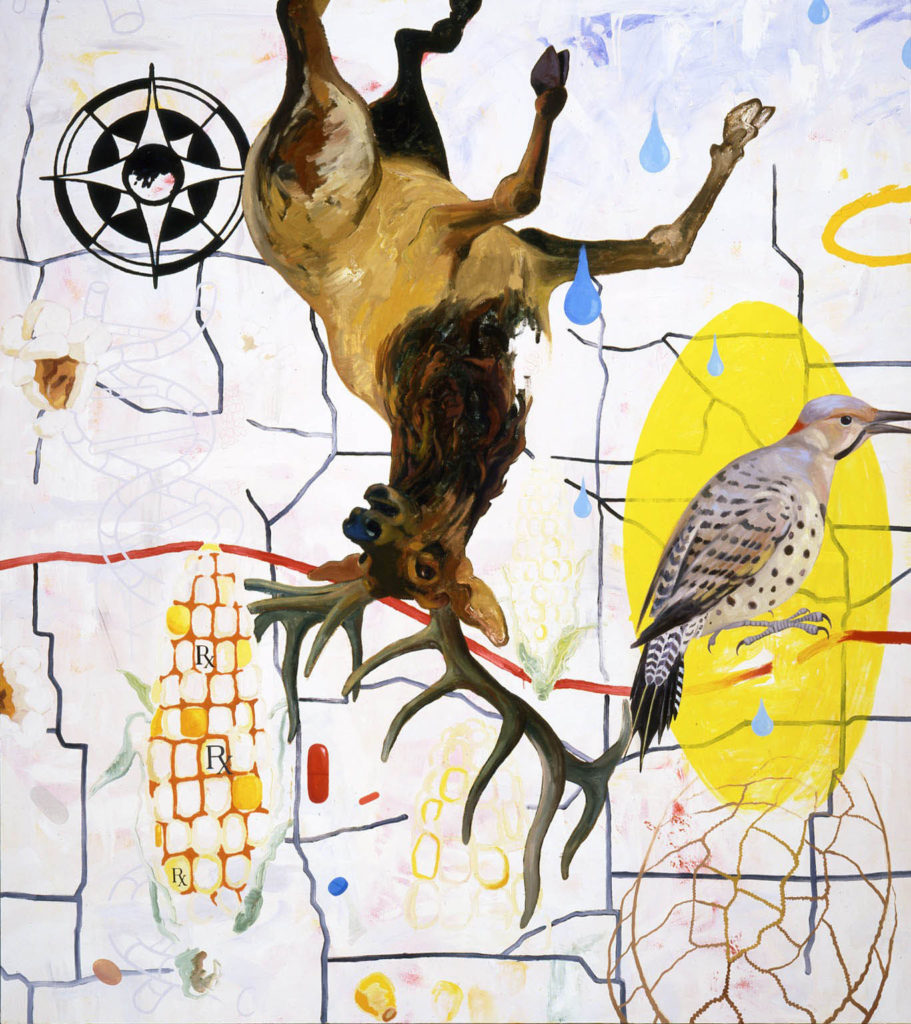 Akers will give an artists talk at 7 p.m. Tuesday.

For a while, Norman Akers sold art at the renowned Santa Fe Indian Market. It was the 1980s, and he’d just graduated from the Kansas City Art Institute.

“I have to admit it was one of the rare times I was making a living off of my work,” Akers says. “But what I found is the work I was producing I was becoming less and less engaged with.

“It was very commercial work that I knew the public would buy. Basically, it was a product.”

That didn’t sit well with Akers, so he ditched the market and enrolled in graduate school.

The decision propelled him in a new direction, combining his Osage roots with a contemporary approach that sets him apart from many American Indian artists.

Lawrencians can see his work starting Friday at the Lawrence Arts Center, 940 N.H. The exhibition is one of several events marking the weekend that would have launched the 19th annual Lawrence Indian Art Show. Funding and management difficulties canceled that juried exhibition, and the arts center filled the vacancy with “Paintings by Norman Akers.”

On giant canvases, Akers layers landscape elements with animals, human figures, and objects from nature and technology. The paintings read like storybooks, with symbols creating a visual language. And although they’re a departure from the expressionist Southwest landscapes he hawked 20 years ago in Santa Fe, N.M. – stereotypical images that many collectors associate with native art – they’re very much rooted in his Osage identity.

“I’ve had some people look at my work and say, ‘That’s not Native American, and therefore you don’t know where you come from,'” says Akers, who teaches drawing and painting at Santa Fe’s Institute of American Indian Arts. “I think people have a tendency to judge based on what they’re seeing.”

He’s quick to note that he would never criticize people who participate in native art markets. In Santa Fe, that one weekend of sales alone can sustain a family for most of a year.

“The other side of it is I do think, particularly today when we’re getting more and more native people trained in mainstream institutions, that it’s really important for younger artists to push the boundaries and really challenge the public’s perceptions of what native art is,” Akers says. “That is where innovation occurs.”

Born in Fairfax, Okla., in 1958, Akers grew up in the Osage Nation – a rural setting in northeast Oklahoma. Moving to Kansas City in 1977 to attend the Art Institute represented a major change in his life.

“I really hadn’t been to the city before,” says Akers, now 49. “I found being in school with kids from St. Louis and Denver and Chicago had a major impact on me. I think I realized just how much I really didn’t know, and I found that I kind of embraced that idea of not knowing and spent a lot of time just looking in the library at a lot of contemporary and historical art.”

Akers studied painting with Lester Goldman, dropped out after three years to travel and look at art in Europe, and returned to finish his degree in 1982. But then the dilemma of how to make a living with a B.F.A. presented itself, and Akers enrolled in the museum studies program at the Institute of American Indian Arts. He earned a certificate in that field and worked for a time as a studio artist before heading to the University of Illinois, Urbana-Champaign, to tackle his master’s degree.

Now he supplements his art career with a professorship.

“Teaching has afforded me the luxury of not having to deal with the market,” Akers says. “So I’ve been able to explore my own ideas.”

Chief among those concepts is the notion of connection and disconnection – to a land, a place, a home. For example, trees often show up in his work. In most cases, they’re floating between the earth and sky with their roots and tops half-severed, half-reaching out, trying to attach to something.

“I was born in Oklahoma, and Osage County is my home. Even though I’m living in Santa Fe, I still do not consider that my home,” Akers says. “Over the years, I’ve tried to create a personal symbology of images from various sources that somehow are part of my life. Collectively, they come together to communicate something about my experience.”

Akers has 13 paintings in the Lawrence show; it doesn’t take long to fill a large gallery with 60-by-70-inch canvases.

“They look great in the gallery,” says Mitchell, the exhibition director. “The gallery’s just made for Norman’s work. It’s big, colorful, interesting, meaningful.”

Mitchell contacted Akers when he found out the Convention and Visitors Bureau, which had produced the Lawrence Indian Art Show since it moved in 2003 from Kansas University’s anthropology museum to the arts center, had pulled its support from the enterprise. Up until then, the arts center had supplemented the juried exhibition with a solo show by a contemporary native artist.

“We’re going back to that format : from now on,” Mitchell says.

Judy Billings, director of the Convention and Visitors Bureau, says her organization broke ties with the juried exhibition because of management issues with fundraising and artist relations by Maria Martin, the show’s coordinator. Billings declined to elaborate.

For her part, Martin remains hopeful that she’ll be able to revive the juried exhibition next year – for what would be its 20th anniversary – with a streamlined format, a new venue and renewed support from another umbrella agency.

“We were not able to secure the grant funding that we use for everything but the prize money,” she says. “Some years you’re real successful; others you’re not.”

“We’re still bringing in some of the finest Indian artists in the country to participate in the two-day market, and the Lawrence Arts Center will exhibit the work of a wonderful contemporary artist who is doing some very exciting pieces that I think the public will really enjoy.”