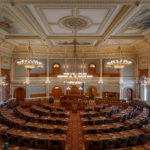 The House of Representatives chamber of the Kansas Statehouse is pictured July 23, 2014 in Topeka.

Topeka ? In the days since the Aug. 2 primary, Republican and Democratic party officials have been poring over maps and spreadsheets, trying to figure out where the major battlegrounds will be leading into the general election.

For Democrats, the goal is to win enough seats so that, when combined with moderate-leaning Republicans, they can form a kind of working majority that can control future debates over issues such as tax and education policies.

On the other side, Republicans who are part of the Brownback coalition are trying to figure out what seats they need to defend in order to keep the solid majorities they’ve enjoyed for the last six years.

And then there is a third set of races that many people are eyeing — those where Democrats are now running against the moderates who just emerged from the primaries, where Democrats may be more interested in building their own party rather than trying to form a coalition.

“I think the Democrats are really serious about trying to build their own party,” said Kansas GOP executive director Clay Barker.

Kerry Gooch, Barker’s counterpart in the Kansas Democratic Party, did not disagree with that statement.

“I’m more interested for sure in building my own numbers than forming a coalition,” he said. “As executive director, it’s my job to elect Democrats, even if that means knocking off moderates.”

Because, Gooch said, putting all legislation aside, the most politically important vote any legislator makes is the one at the very start of the session, when legislators vote to elect a House speaker, Senate president and leadership teams who decide what the agenda will be, and what bills will be allowed to come up for votes.

“Even as a moderate Republican, who is your vote for leader going to be?” Gooch asked.

All of the strategies start with the basic math of the Kansas Legislature, where there are 125 seats in the House and 40 seats in the Senate.

In the House, that means it takes 63 votes, a simple majority, to pass any measure, and 84 votes to form the two-thirds majority needed to override a veto or pass a constitutional amendment. In the Senate, those numbers are 21 and 27 respectively.

Currently, Republicans hold 97 seats in the House and 32 in the Senate, far more than a veto-proof majority in both chambers.

But that doesn’t tell the whole story, because for the last 20 years or so Kansas has effectively operated under a three-party system in which moderate Republicans and conservative Republicans virtually comprise separate parties, with their own slates of candidates and their own policy agendas.

Getting an exact count of how many “moderates” and “conservatives” there are in each chamber can be more of an art than a science. It varies, depending on the issue at hand and what the political circumstances are surrounding the issue at any given time.

But by most counts, including Barker’s, the conservative wing of the party — what some call the “Brownback coalition” — controls 68 to 70 seats in the House and 27 to 29 seats in the Senate.

That leaves moderate Republicans with 27 to 29 seats in the House and three to five in the Senate.

Democrats hold only 28 seats in the House and eight in the Senate.

So in order to move the balance of power in the Legislature, Democrats and moderate Republicans as a coalition need to win enough seats to pull the conservatives’ numbers below 63 in the House and 21 in the Senate.

But at Democratic Party Headquarters, Gooch is less optimistic, and he thinks the coalition still needs to pick up more.

“Four (more) in the Senate would be enough to start stopping, and maybe start passing some things,” he said. “I think in the House, it’s a bigger hill to climb. We need at least eight or nine more Democrats.”

Whether talking to Democratic or Republican leaders or party officials about where the most contested battlegrounds will be in November, the lists are remarkably similar. Both parties are eying the same races, for the same reasons.

Factors they consider are how well funded each candidate is, how well known he or she is in the district, how the districts voted in the last gubernatorial and presidential races and, generally, how popular or unpopular the incumbent is.

Here is a look at the top races that both parties say are in play:

1st Senate District: Rep. Jerry Henry, a socially conservative Democrat, is challenging Sen. Dennis Pyle, a three-term incumbent. It’s a reliably conservative district in the northeast corner of the state, but Henry comes from a large, well-known family and raised more than $20,000 during the primary cycle. That’s a little less than Pyle raised. Still, both parties are calling the race competitive.

5th Senate District: Bill Hutton, an attorney from Basehor, is challenging Republican Sen. Steve Fitzgerald of Leavenworth. The district tilted toward Democrat Paul Davis in the last gubernatorial race, and Hutton has raised more than $45,000 for his campaign, while Fitzgerald brought in less than $9,000 in the last cycle.

10th Senate District: Vicki Hiatt, a retired special education teacher from Shawnee, is taking on two-term incumbent Sen. Mary Pilcher-Cook. Two years ago, Davis nearly tied Brownback in that northeast Johnson County district. Hiatt raised more than $12,000 in the primary cycle, a little more than Pilcher-Cook, although Pilcher-Cook had a considerable bankroll on hand coming into the race.

13th Senate District: In southeast Kansas, Lynn Grant, the widow of the late former Rep. Bob Grant, is taking on first-term incumbent Sen. Jacob LaTurner. One sign that even Republicans know this is competitive is the number of favors Brownback and GOP Senate leaders have done for LaTurner — pulling a highway project in Crawford County off the chopping block; making sure Pittsburg State University took smaller budget cuts than larger universities; and blocking a ceremonial bill to name a buffalo herd near Pittsburg after Bob Grant.

The district has leaned Republican in recent statewide and federal elections, but not by as much as the state as a whole. LaTurner raised only about $2,000 during the primary cycle, although he had more than $100,000 in the bank to start with. Grant has raised more than $20,000 since the first of the year.

25th Senate District: This district leaned toward moderates for several years until 2012, when Michael O’Donnell won the GOP primary against incumbent Sen. Jean Schodorf as part of the Kansas Chamber-backed conservative takeover of the Senate. In the 2012 gubernatorial race, Davis carried the district by nearly 10 percentage points over Brownback, and President Barack Obama lost it by only a fraction of a percentage point in 2012.

O’Donnell chose not to run for a second term, opting instead to run for the Sedgwick County Commission.

Democrat Lynn Rogers, a member of the Wichita school board the last 15 years, is now seeking the seat. He faces Republican Jim Price who, according to the Wichita Eagle, has two criminal convictions on his record.

Rogers raised nearly $48,000 during the primary cycle, while Price raised only $500.

28th Senate District: Democrat Keith Humphrey, president and CEO of Jet AirWerks and Jet AirParts in Wichita, is challenging Sen. Mike Petersen, chairman of the Senate Transportation Committee. Two years ago, Davis carried the district over Brownback. Humphrey raised more than $46,000 in the primary, compared with less than $15,000 for Petersen.

32nd Senate District: Democrat Don Shimkus, past president of the Kansas Association of School Boards, filed to run against Sen. Steve Abrams, R-Arkansas City, a conservative who chairs the Senate Education Committee. But late in the filing season, Abrams abruptly announced he would not run again, and Larry Alley of Winfield filed to take his place.

Alley has run three unsuccessful campaigns for the Kansas House, narrowly losing two years ago to Rep. Ed Trimmer, D-Winfield. The district is heavily Republican, which makes the race a bit of a long shot for Shimkus, both parties say. But part of the district went moderate in the primary when Rep. Kasha Kelley, R-Arkansas City, narrowly lost her race to Anita Judd-Jenkins. Shimkus raised more than $14,000 during the primary cycle, compared with $5,850 for Alley.

There are also two races where Democrats are targeting moderate Republicans who just won competitive primaries.

Those include the 21st District, where Republican Dinah Sykes, who just defeated incumbent Sen. Greg Smith, of Overland Park, faces a strong challenge from Johnson County businessman Logan Heley, who raised more than $54,000 in the primary campaign, the fourth-highest fundraising total of any legislative candidate this year. Sykes raised a considerable amount herself, more than $37,000, but spent much of it winning her primary over Smith.

House races tend to be more difficult to predict because they are smaller and the margin of victory is often within a few hundred votes or less.

But there are two races that both parties admit are vulnerable: one that Republicans could lose; and one the Democrats stand to lose:

88th House District: Rep. Joe Scapa, R-Wichita, is seen by both parties as the most vulnerable incumbent in the House. He was first elected in 2010, then lost his seat to a Democrat in 2012, only to win it back in 2014. That was considered odd because the district went strongly for Davis in the gubernatorial race that year, and President Barack Obama narrowly carried it in the 2012 presidential race.

He’s being challenged this year by Democrat Elizabeth Bishop who has worked in city and county government for several years and, for a time, was an aide to former Democratic Congressman Dan Glickman.

63rd House District: This is the Atchison County district that Democratic Rep. Jerry Henry is vacating in order to run for the Senate. Brownback carried it with 56 percent of the vote in 2014, and Republican Mitt Romney carried it with 62 percent over Obama in 2012.

Fundraising in the race has been close so far. Eplee raised nearly $10,000 during the primary election cycle, while Neibling raised a little less than $8,000.

Another district that is potentially competitive is in Douglas County, where Rep. Tom Sloan, R-Lawrence, is being challenged by Democrat Terry Manies, of Lecompton.

Sloan, an 11-term incumbent, holds a huge fundraising advantage over Manies, going into the race with $51,000 on hand. But Manies did pull in a respectable $5,340 during the primary cycle.

Two years ago, Davis carried the district with 68 percent of the vote, and Obama carried it with 54 percent in 2012, making it one of the most heavily Democratic districts in the state. But voters there have elected Sloan 11 times, possibly because he tends to vote with Democrats much more often than he does with the conservative majority in the House.